Daewoo Shipbuilding & Marine Engineering’s (DSME) former Chief Executive Officer Nam Sang-tae was taken into custody as part of an accounting probe into the financials of the South Korean shipbuilder, launched earlier this month. 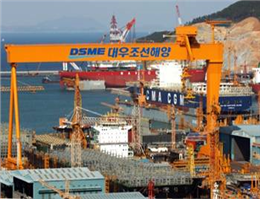 According to the Korea Herald, the CEO was called in for questioning on Monday and was subsequently taken into custody due to allegations related to breach of trust, MANA correspondent reported.
The Seoul Supreme Prosecutors’ Office reportedly plans to ask the court officials to issue an arrest warrant for the CEO on Wednesday.
Nam Sang-tae, who was at the helm of the shipbuilding company from 2006 to 2012, is suspected of playing a great part in the alleged accounting fraud as his actions reportedly led to a financial damage of more than KRW 10 trillion.
The probe found an accounting fraud in the amount of some KRW 1.5 trillion (USD 1.28 billion), and revealed that the company’s management undertook business projects without legitimate procedures.
Furthermore, the probe found that the shipbuilder’s main creditor Korea Development Bank reportedly failed to conduct proper inspections on DSME’s management.
The results of the accounting investigation were released by South Korea’s Board of Audit and Inspection after the country’s prosecutors raided the ailing shipbuilder’s offices on June 7.
0
Tags: Shipbuilding Daewoo Shipyard south korea
Visit Home
Send to friends
Print
Newsletter
Share this news