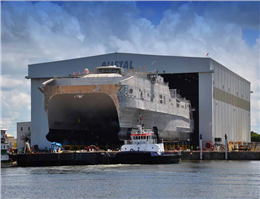 According to MANA,One of the contracts valued about A$16m was for the construction of a 50-metre high speed passenger catamaran for Seaspovill Company, which operates a number of high-speed ferries on multiple domestic routes in South Korea, Austal said in a statement.
The vessel, which will be build by Austal Philippines, will have the capacity to carry up to 450 passengers at speeds of up to 40 knots. Delivery date is expected in June 2017.