Fincantieri Signs $4.5B Deal With Qatar

Fincantieri has signed a deal worth almost 4 billion euros ($4.47 billion) to build seven ships for Qatar, the Italian state-controlled shipbuilder said on Thursday. 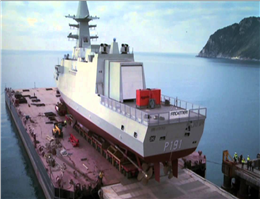 According to MANA. Fincantieri will supply the Gulf state with four corvette warships, two support vessels and an amphibious landing platform dock, and will provide support services in Qatar for 15 years after delivery, the company said in a statement.
All the ships will be built in Italian shipyards, with construction beginning in 2018.
Italy's defence company Leonardo-Finmeccanica will supply electronics and weapons systems for the ships and will receive around a third of the value of the deal, or more than 1 billion euros, a company official said.
The deal was signed in Rome by Fincantieri Chief Executive Giuseppe Bono and Qatari naval commander Mohammed Nasser Al Mohannadi, in the presence of Italian Defence Minister Roberta Pinotti and her Qatari counterpart Khalid bin Mohammed Al Attiyah.
0
Visit Home
Send to friends
Print
Newsletter
Share this news