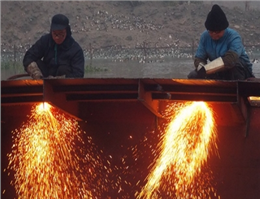 According to MANA,Declining steel prices and the rising cost of environmentally-friendly shipbreaking methods are hitting the bottomline of the recycling yards, despite government policies encouraging higher vessel scrapping in response to shipping’s overcapacity.

Zhang Yongfeng, deputy director of the market research office of Shanghai International Shipping Institute (SISI), suggested that the government can also consider offering tax cuts or grants to those yards buying steel cutting equipment to help them upgrade their operations to be more environmental-friendly.
As China’s steel products are being exported to many developing countries such as Brazil, India, South Africa and Turkey at lower prices now compared to previous years, the price of China’s domestically produced steel has been dragged down, affecting scrap prices at the yards.
China Daily cited figures showing China’s shipbreaking industry revenue falling by 15% year-on-year to RMB3.4bn ($515.6m) in 2015.
To make matters worse, the number of bulk carriers and offshore oil rigs being sent for scrap due to their respective sluggish sectors has grown by more than 30% in the past year, adding to the oversupply of the cheaper scrap metal.
Yang Jianchen, general manager of Zhoushan Hongying Shipbreaking, was quoted saying: “The period between 2006 and 2013 was good for the industry. The decline in global steel prices including scrap has pushed many shipbreakers in Zhejiang into the red.”