The director of Sistan-Baluchestan Province‘s Ports and Maritime Organization stated: with the investment of 40 Million Dollars by the private sector, the agreement for establishing Oil Products warehouses Terminal(tar) was signed in Shahid Beheshti Port. 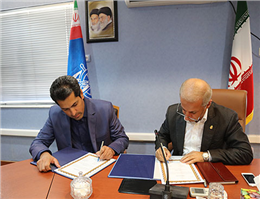 Pointing out to the signing an agreement for establishing Oil Products warehouses Terminal(tar) with the investment of 40 Million Dollars by the private sector,Siavoosh Rezvani stated to MANA correspondent: this agreement was signed between Birjand Behbood Sanat industrial group (BS group) and Ports and Maritime Organization with the investment of 40 Million Dollars in one hectares with the annual capacity of 50.000 tons for a 15- years period in the form of BOT,” one year has been considered for establishing this terminal” he added.
Making a reference to the launching of the first phase of Chabahar Port Development Plan in the near future, the director of Sistan-Baluchestan Province‘s Ports and Maritime Organization remarked: considering the imminent launching of the first phase of development plan, Booming Period is staging in Chabahar Port, he added, the situation of the region has undergone a huge change, due to presence of countless investors.
He asserted: this organization with following the determined objectives of Resistance Economy Policy, in addition to paving the necessary .grounds for attracting the investors from the  private sectors,has put the economic growth of this region on its agenda
The director of Birjand Behbood Sanat industrial group(BS group) stated: it is hoped that through exporting Tar from Chabahar Port to countries such as India, Pakistan and United Arab Emirates, we manage to take the lead from our rivals.
Iman Ali doost continued: simultaneously with establishing the warehouses for exporting Tar in Chabahar Port, we are seeking for warehouses in ports of Tianjin in China and Hamburg in Germany.
0
Visit Home
Send to friends
Print
Newsletter
Share this news