The fire on board Maersk Line’s Safmarine Meru containership is under control, with external firefighting operations concluded, Maersk Line said in an update. 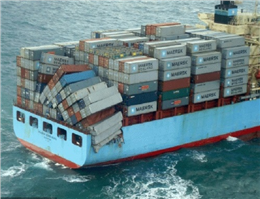 According to MANA, The fire broke out after Safmarine Meru collided with a German-owned container vessel Northen Jasper some 120 nautical miles East of Ningbo on May 7, 2016 while the 2006-built boxship was en route from Qingdao to Ningbo in China.
As informed, fire tugs remain nearby to observe any development.
The 22 crew members are reported to be safe and sound, with counselors onsite offering ongoing support. Arrangements to release the crew for shore leave are underway, the update reads.
“A team of Chinese authority officials and Maersk Line representatives have during Tuesday 10 May been on board the Safmarine Meru to survey the damages and gather information needed to make plans for moving the vessel to shore. The vessel is without power and has suffered some water ingress, but condition is stable and it is deemed suitable for towage,” the company added.
“We are currently cooperating with the Chinese authorities to develop a plan to safely tow the vessel alongside in the Port of Ningbo. We will not speculate or comment on the circumstances leading to the incident while investigations are ongoing,” says Palle Laursen, Head of Ship Management in Maersk Line.
Safmarine Meru is a 4,650 TEU container vessel, sailing under the Hong Kong flag. At the time of the collision, Safmarine Meru had less than 400 full containers on board.
0
Visit Home
Send to friends
Print
Newsletter
Share this news