The director of Hormozgan Province Ports and Maritime Organization announced that the newest and the largest ro-ro ship with the capacity of 7500 tons belonging to K Line will dock at Shahid Rajaee Port in the near future. 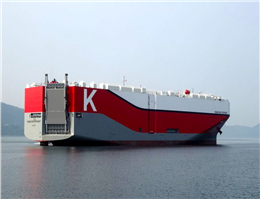 With a reference to Japanese K Line executives’ visit to Shahid Rajaee Port, MANA reported, Ebrahim Idani stated that the Japanese’s visit to Iran’s largest commercial port took place for the purpose of re-starting the container liners and ro-ro vehicle-carrying ships to Shahid Rajaee Port.
Possessing 68 container ships with the capacity of 355 thousand TEU, he added, K Line shipping line is the 17th best container line in the world. This line is almost a century old, and its mission is concentrating on customers and CRM.
The director of Hormozgan Province Ports and Maritime Organization counted the number of this line’s vessels, including its ro-ro fleet, to be 499, which are actively sailing through 54 world-wide routes. Based on the statements of this line’s executives, he further asserted, the newest and largest of K Line ro-ro ships is going to sail in Shahid Rajaee Port in the near future. This vessel has the capacity of carrying 7500 vehicles.
It is noteworthy that Shahid Rajaee Port is one of the most paramount international trade cores since it is located within a very short distance from the trans-continental route and in the junction of North-South Transit Route. While 90 % of Iran’s commercial goods are carried via maritime transportation, Shahid Rajaee alone is responsible for 53 % of this total mass in the fields of transit, import, export, and other port activities. Therefore, this port is highly influential in the economy of this region.
0
Visit Home
Send to friends
Print
Newsletter
Share this news