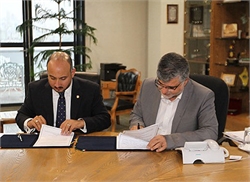 Mohammad Rastad, MANA reported, added that the MOU on the Panama Maritime’s one-way recognition of Iranian-issued maritime documents was signed by Iranian Ports and Maritime director (on the behalf of Iran’s administration) and Panama’s maritime secretary (on the behalf of Panama’s government) on April 11th, 2016. This MOU was signed one-way based on the I 10 directive of International Convention on Standards of Training, Certification and Watchkeeping (STCW).
According to Rastad, this MOU would bring about job opportunities for Iranian sailors on the decks of the ocean liners who sail under the flag of Panama. Moreover, arrangements were made for the Iranian party to evaluate and assess the Maritime training and testing procedures of Panama, and in case of Iran Shipping’s satisfaction with Panama’s maritime certificates, this MOU would turn from one-way to mutual.
It is noteworthy that Islamic Republic of Iran’s administration joined STCW on July 29th, 1978; and it was put in the white list of the International Maritime Organization (IMO) for the third time. Just like the other countries on the white list, Iran’s administration is obliged to execute all the directives issued by the IMO.
Of the 88 members of the STCW, only 30% of the countries have managed to stay on the white list of the convention since the 2010 amendments.
0
Visit Home
Send to friends
Print
Newsletter
Share this news