CHINA Cosco Shipping on Friday clinched its purchase of a majority ownership stake in Greece’s largest port in the first cross-border merger or acquisition since the Yuan600bn ($92.8bn) group was created in February by the merger of Cosco Group and China Shipping Group. 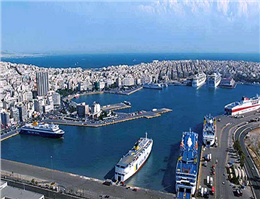 According to MANA,For Greece, the deal was even more significant, marking the second major privatisation the indebted country has managed in the last few months under pressure from the international creditors that have agreed three huge bail-outs for Athens in the last six years.
Signed by Greek prime minister Alexis Tsipras, the head of the privatisation agency Stergios Pitsiorlas and Xu Lirong, chairman of China Cosco Shipping, the deal gives China Cosco 51% of the Piraeus Port Authority for €280.5m ($319.7m) and provides for the Chinese state giant to carry out €350m in investments over the next decade.
In five years, the buyer will acquire the remaining stake of 16% for €88m from the Greek state.
Mr Xu said that China Cosco Shipping would “vigorously embark on a new series of infrastructure and operational investments that will fully streamline the port’s performance and will help PPA reach its full potential to become one of the leading ports in Europe”.
"Piraeus would be a state-of-the-art port that will connect Asia and Europe trade, but will also create jobs and help invigorate the Greek economy.”
The Cosco Group has been investing in the port’s container terminal since 2009 after winning a 35-year concession to operate the terminal.
Piraeus has been identified as a key gateway to European markets under China’s ‘one belt, one road’ plan that could include up to 60 countries.
According to Mr Xu, Piraeus has now become “a modern large-scale container terminal with leading technology” and the fastest growing port in the past two years in terms of port handling capacity among the Top 100 container ports internationally.
China’s ambassador to Greece, Zou Xiaoli, said that the agreement marked “a historic milestone for Sino-Hellenic friendship and relationships at multiple levels” and would turn Greece into “the leading gateway for Chinese products to Europe”.
Despite the promise engendered by the takeover, and the likelihood that it will create jobs and provide a fillip for the country’s shattered economy, the sale has caused controversy in Greece.
The country’s port workers’ federation staged a 24-hour strike on Friday to protest the sale, which it said represented a betrayal by Mr Tsipras' left-leaning coalition government.
It pledged to launch a number of legal challenges to the sale, as well as upcoming privatisation plans for Thessaloniki and other ports, and warned that port privatisations had no chance of succeeding without proper safeguards for jobs and labour relations.
0
Visit Home
Send to friends
Print
Newsletter
Share this news