The Director of South Pars Special Economic Energy Zone (PSEEZ) stated: South Pars witnessed the export of 13,238,000 tons of non-petroleum goods with the worth 7,328 ,000,000 dollars in the course of the past year. 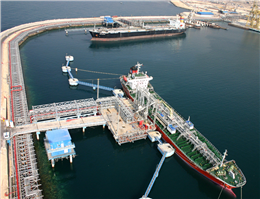 Stating that South-Pars Customs occupies the first rank of non-petroleum exports in Iran, Mehdi Yosefi remarked in a press conference in Asalouyeh that ,although, the sanctions had deterred the development of this region as well as the production process in petrochemical complexes ,but the exports were not deterred, in a way that South-Pars holds the first rank in the exports of non-petroleum goods both in the era of sanctions and post –sanctions era.
Referring to the 28-percent rise in the exports from South-Pars, he asserted: South-Pars experienced the export of 13,238,000 tons of non-petroleum goods in 2015, which this figure highlights a 28-percent ascent weight-wise in comparison with the same period in 2014.
Counting the worth of exported goods from South-Pars as 7,328,000,000 dollars ,Yosefi added: the exported goods from South Pars Special Economic Energy Zone (PSEEZ) which encompass heavy and light polyethylene, Diethylene glycol, monoethylene, Butan, Propane,gas condensates, cement, and methanol have been exported to 29 countries.
Deeming South-Pars port complex as a main road for exporting and importing goods to and from Asalouyeh, Mehdi Yosefi stated: South-Pars port complex enjoys 25 dock posts including 10 service dock posts and 15 dock posts special for exporting petrochemical products. The Director of South Pars Special Economic Energy Zone (PSEEZ) emphasized that this port complex as a main road for exporting and importing goods has always played a paramount and effective role in the economic, industrial and energy development of this region.
0
Visit Home
Send to friends
Print
Newsletter
Share this news