With the approval of National Development Fund and the Ports and Maritime Organization, the preparation and operation project of Chabahar's Shahid Beheshti will be initiated with an investment of 403 million Dollars. 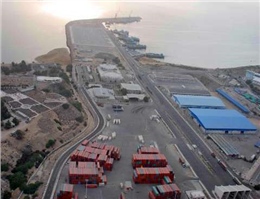 The C.E.O. and the head of the board of directors at Arya Banader-E-Iran Port and Maritime Services Co. stated to MANA reporter that his company has shouldered the duty of constructing the first phase of Chabahar's Shahid Beheshti Port in an area of 210 hectares.
Referring to the negotiations with an Indian company regarding the operation of 70 hectares of Shahid Rajaei Port's lot with an investment of up to 85 million Dollars, Kioumars Faramarzi stated that the Indian government has committed to allocate a credit fund of 150 million dollars to this project in case this contract is signed.
In the end, Faramarzi stated that the 403-million-Dollar investment in this port complex will result in a boom in the transit and transportations. As well, it could give rise to a development in the transit and railway infrastructures of the province. Chabahar is Iran's one and only strategic port in the Oman Sea.
0
Visit Home
Send to friends
Print
Newsletter
Share this news