A Chinese company has won the bid to operate the Port of Darwin under a 99-year lease deal worth $506 million, NT Chief Minister Adam Giles has announced. 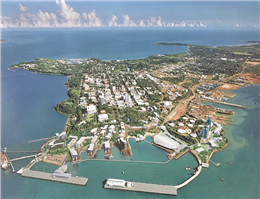 According to MANA, Mr Giles announced the Port of Darwin will have a new operator under an agreement signed today with the Landbridge Group worth $506 million, in a deal he described as "a fantastic outcome for the Territory".
Under the terms of the agreement, Mr Giles said the Territory would lease the Darwin Port land and facilities of East Arm Wharf, including the Darwin Marine Supply Base, and Fort Hill Wharf to the Chinese-owned Landbridge Group for 99 years.
The Territory will retain Stokes Hill Wharf, Fisherman's and Hornibrook's Wharves and Frances Bay facilities.
As part of the deal Landbridge have paid the full price for the lease, but only taken an 80 per cent ownership stake, Mr Giles said.
Within five years the Chinese company must find an Australian investor to purchase the other 20 per cent, and until that time that stake will remain with the NT Government.
Mr Giles said this kept a promise he had made for a large element of the port to remain in Australian hands.
He said in Landbridge, the NT had "a partner that has demonstrated an outstanding track record of investment and innovation that has underpinned remarkable growth, and with it new trade and jobs".
"The lease process has delivered on many levels and we have ensured that employees, port users and the Government's interests are well protected. This is a fantastic outcome for the Territory," he said.
0
Visit Home
Send to friends
Print
Newsletter
Share this news