Tanzania started construction work on a $10 billion port and special economic zone on Friday, a project backed by China and Oman that aims to transform the East African country into a regional trade and transport hub. 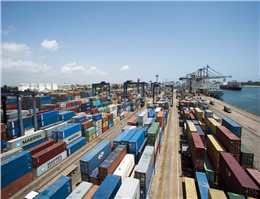 According to MANA, The port, which will be Tanzania's biggest, is being built at Bagamoyo, 75 km (47 miles) north of Dar es Salaam - the commercial capital that is currently the site of the country's main port, which is operating beyond its capacity with limited space for expansion.
President Jakaya Kikwete attended a groundbreaking ceremony and said construction of phase I of the project would take three years. "The construction of the Bagamoyo port and a special economic zone is aimed at realising the government's goal of bringing about an industrial revolution in Tanzania," he said.
Government officials said the port would be able to handle mega-ships - with a container vessel size of 8,000 twenty-foot equivalent units (TEUs) - after the first phase was completed, with room for expansion.
The whole project including roads, railways and the economic zone is expected to take 10 years to complete, but it was unclear in how many phases it will be carried out.
The project is financially backed by China Merchants Holdings (International), China's largest port operator, and Oman's State General Reserve Fund. The Chinese firm will handle much of the construction work.
Tanzania is East Africa's second-biggest economy after Kenya, and cargo volumes at the existing Dar es Salaam port are expected to rise as much as 25 percent this year to 18 million tonnes.
The World Bank said last year that inefficiencies at Dar es Salaam cost Tanzania and its neighbours up to $2.6 billion a year.
The project would dwarf Kenya's port at Mombasa, east Africa's trade gateway about 300 km (180 miles) to the north, and aims to capitalise on growth in a region seeking to exploit new oil and gas finds.
Jianhua Hu, executive vice-president of China Merchants Holdings, said implementation of the project marked "the most significant event" in Tanzania-China relations over the past four decades.