China’s shipbuilding sector will need to reverse five major problems if it wants to emerge from the current recessionary state, according to Jin Peng, secretary general of China Association of the National Shipbuilding Industry (Cansi). 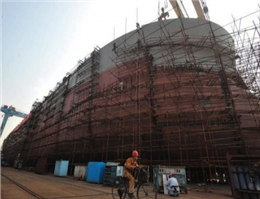 According toMANA, Jin told delegates at the Senior Maritime Forum of Marintec China 2015 on Wednesday that the country needs to hold a 10-20 years long term development plan to rebuild the distressed shipbuilding industry.
“The oversupply of yard facilities continues to be a very obvious problem for China. The shipbuilding industry is listed as one of China’s six seriously oversupplied industries,” Jin said.
“After the last few years of consolidation, we have seen some improvements but the oversupply problem remains glaring, especially for commercial shipbuilding,” Jin said, adding that China’s shipbuilding capacity has dwindled from around 80m dwt to the current 65m dwt over the last couple of years.
A second problem facing Chinese shpyards is a continual lack of R&D investments compared to neighbouring competitors of Japan and South Korea. Chinese yards would need to step up in the areas of inhouse proprietary ship designs if they are to take on global competition, where European yards, in particularly, have a leading edge.
“The third problem we are seeing is that local manufacturing and equipment services are insufficient. China is using about 70% of locally manufactured equipment, compared to Korea at about 80% and Japan at abour 90%,” Jin pointed out.
He also observed that global newbuilding prices have remained low, negatively impacting the margins for shipbuilders and leading to unhealthy competition. “We believe our new order pricings are still at reasonable levels, though I understand there are some yards that accepted below-market newbuilding prices and irrational downpayment of as low as 1% of the contract price,” he said.
A fifth problem, according to Jin, is the continuing decline in new order intakes for the past consecutive years since 2010. In the first 10 months of 2015, for example, new orders have plunged by 62.1% year-on-year to 20.38m dwt.
“For the whole of this year, new orders received by shipyards are expected to record a larger decrease compared to 2014,” Jin said.
0
Visit Home
Send to friends
Print
Newsletter
Share this news