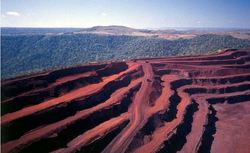 The Brazilian mining giant Vale has cut its iron ore production forecast for 2020 by 25m to 30m tonnes given additional safety measures to limit the impact of the spread of coronavirus.

Average weighted capesize time charter on the Baltic Exchange rises to $10,081 per day by Monday’s close, the highest since January 3.

VALE EXPECTS ITS FULL-YEAR IRON ORE PRODUCTION TO COME IN AT 310M TO 330M TONNES.

VALE, Brazil’s mining giant, has revised downwards its forecast for iron ore production for 2020 given additional safety measures related to the coronavirus outbreak.

The miner said in a statement that it expects production to come in at 310m to 330m tonnes. Its previous guidance was 340m-355m tonnes.

It cited delays in the resumption of halted operations such as in Timbopeba and Fabrica combined with delays related to “inspections, assessments and authorisation processes”.  It also sees risks associated with increased absenteeism.

Its first-quarter production also missed estimates, with iron ore output at 59.6m tonnes versus previous projections of 63m to 68m tonnes, and far lower than the 72.9m tonnes output in the first quarter of 2019.

Vale said in March that its operations could be hampered by the coronavirus outbreak.

The average weighted capesize time charter on the Baltic Exchange rose to $10,081 per day by the close on Monday, the highest since January 3 and a 71% increase from April 1. Both the Brazil to China and Australia to China routes gained.

Arctic Securities said in a note: “For dry bulk shipping, a negative guidance revision from Vale is certainly not supportive news, as it will likely mean less high-grade iron ore to be shipped long-haul from Brazil to China.”

However, it expects that iron ore shipments from Brazil will amount to about 30m tonnes per month for the remainder of the year, which would mean a rise of 8% year on year.

“There’s upside potential in rates and earnings going forward, in our view,” it said.

Maritime Strategies International said Australian miners would certainly look to capitalise on the tighter global supply given Vale’s difficulties, but there was a growing likelihood of disruption there too.

According to MSI’s analyst William Tooth, one of the effects of the global pandemic has been a loss of steel demand as car factories close and manufacturing slows or stops, which is weakening iron ore demand.

However, China’s gradual return “will provide support for capesize earnings”, he said.