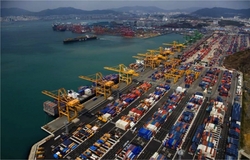 Demand levels are high ahead of the early Chinese New Year shutdown. But analysts warn that a sting in the tail will come in February.

Rates have been buoyant on many head haul routes but there are signs that carriers are struggling to recover increased bunker costs.

CONTAINER lines are benefiting from strong pre-Chinese New Year demand, but a slowdown in February could lead to challenging conditions.

Demand has been boosted as shippers seek to transport volumes ahead of the annual shut down of Chinese manufacturing. This year’s Chinese New Year celebrations begin earlier than usual, on January 25, meaning a shorter period for exporters to get goods shipped.

This has led to high utilisation, with Platts reporting 100% load factors on some key head haul voyages. With volumes up, rates have also strengthened over the past few weeks.

The Shanghai Containerised Freight Index spot rate from Shanghai to Europe was up 41% to $1,124 per container on in the first week of January, the highest level since December 2016.

The China Containerised Freight Index, which covers both spot and long-term contractual rates in 10 Chinese ports, has also risen by 10% to 1,096 points in the same period.

“This has left carriers vying to maximise profits while rates remain firm on trade lanes from North Asia,” Platts said.

“With vessel utilisation on these key head-hauls at or above 100%, carriers are reluctant to employ void sailings at this point, especially with ever increasing roll pools that will likely have to be pushed into February loadings in some instances.”

It added that the number of blankings employed by carriers was lower than previously expected for this time of year.

Recently released figures from Containers Trade Statistics showed a decrease in transpacific demand to 1.5m teu in November, the latest date for which figures are available. This was down 15% on the previous year, while year-to-date volumes by November were down by 2.2% to 17.2m teu.

“Many shippers had front-loaded ahead of these expected tariffs and so the spot demand at this point is lower than previously anticipated in the market,” Platts said.

Moreover, carriers have been warned that the demand boost may be short-lived. Platts expects void sailings to increase in February as carriers look to mitigate the fall in rates as a result of a sharp fall in demand following the factory closures.

This will also be a challenge for lines trying to recover the increased cost of bunker fuels following the introduction of new sulphur cap rules this month.

BIMCO noted that the increase in rates that had been attributed to carriers pushing through bunker surcharges was in fact jus the usual seasonal uplift in rates ahead of Chinese New Year.

“These rate increases are because of strong seasonality, rather than carriers successfully implementing new bafs to pass on additional fuel costs linked to IMO 2020,” BIMCO said. “In the past five years, the SCFI Europe spot rate has averaged $1,063 per teu in the first week of the year. The spot rate on January 3 is thus only $60 above this five-year average.”

This would not be anywhere near enough to offset the cost of IMO 2020 compliance, BIMCO added, particularly given the increase in fuel costs in the past month.

“The new bafs have proven hard to implement due to a lack of transparency in the calculations as well as poor market fundamentals,” BIMCO said.