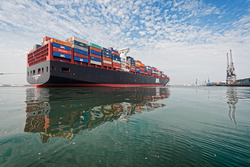 Overcapacity and the trade war continue to haunt container shipping. Freight demand and vessel supply are still out of balance.

After an ‘extremely dull’ year, container carriers have little to look forward to in the new year, BIMCO says

THE trade war between the US and China and continuing overcapacity are likely to mean 2019 will be remembered as an “extremely dull” year for container shipping.

Early indicators form US inventory-to-sales ratios showed there was no front loading of volumes this year ahead of the next round of tariffs on December 15, he said.

“Global demand growth of 1% for the first three quarters of the year is unlikely to turn around for the fourth quarter,” BIMCO chief shipping analyst Peter Sand said in an outlook webinar. “Fourth-quarter demand from front loading inflated volumes last year so the full year total is likely to be lower than it is today.”

The trade war is continuing to have a negative effect on box shipping.

“Whichever way you look at it, 2019 did not deliver on demand,” Mr Sand said. “Looking at 2020, imports into developing markets could improve, but what matters most for container shipping is imports into developed countries, but this is still very much entangled in the trade war.”

The International Monetary Fund is forecasting a 3.4% growth in 2020, but this was unlikely to be the full picture, as the future always looked brighter from a distance, Mr Sand said.

Moreover, there would be a “double-whammy” as the multiplier effect was also deteriorating.

“It is a massive challenge, to say the least,” said Mr Sand. “But below the headline, we see very different developments. There is strong demand going into Europe from Asia, which is the most positive story in terms of demand growth for 2019, up by 3.7% in the first three quarters.”

This, however, had to be tempered with the reality of freight rates, which had failed to rise in line with demand.

“While the CCFI was slightly up in November, rates remained 4% lower than the same time last year. Over the year, average freight rates for 2019 compared with 2018 on the Asia-Europe trade were down 4.7%, despite a demand growth of 3.7%.”

The reason for this was ongoing overcapacity on the trade lane, he said.

“The inflow of ultra-large containerships being fed into the one trade which is growing has resulted in negative freight rate growth.”

BIMCO expects final containership fleet growth to finish the year at 3.7%, down from last year, but still to high given volume growth of just 1%.

“That is a deterioration of the fundamental balance,” Mr Sand said.

“Going into 2020 our growth expectations are around 3%, and we certainly need a reversal of fortunes in the trade war in order to bring around a stronger market in 2020. Right now it is not on the cards.”