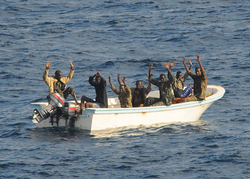 The kidnapping of 17 seafarers off Cameroon and the attack on an LPG carrier off Nigeria within a spate of a few days has thrown the spotlight back on a recurring problem. The shipping association wants Nigeria, where a considerable number of the incidents emanate from, to work with countries with seasoned navies to curb the threat quickly.

Call comes after the abduction of 17 seafarers in the Gulf of Guinea.

NIGERIA should embrace international naval co-operation to curb piracy in the Gulf of Guinea, according to a senior maritime security official.

Speaking after two more violent attacks on shipping in the region, Bimco chief executive Jakob Larsen said Nigeria should seek to collaborate to eradicate a chronic problem that is threatening the maritime community.

“They have the resources, capabilities and skills to carry out an effective law enforcement operation,’’ Mr Larsen told Lloyd’s List. “And I think it will be needed if the problem is to be brought under control relatively quickly.”

Nigeria recently passed legislation targeting piracy and has pledged to eradicate the threat in its waters within months. However, attacks have continued.

While Mr Larsen commended Nigeria for its latest efforts to combat piracy, he stressed that the focus should be that law and order prevail and not who carries it out.

According to the International Maritime Bureau, during the first six months of this year, 27 crew were kidnapped in the Gulf of Guinea, accounting for 92% of all hostage-takings globally.

A total of 17 seafarers were abducted from two vessels in two separate incidents last week in Cameroonian waters.

Days earlier, an LPG carrier was shot at in Nigerian waters. The vessel managed to evade the attackers.

While the attacks happened in Cameroonian waters, Mr Larsen observed that it is often Nigerian gangs of pirates that carry out these attacks in neighbouring waters.

“If it goes as it usually does, the hostages will be free within three to four to five weeks perhaps. And then we will know more about where they were taken... and also the nationality of the [pirates],” he said.