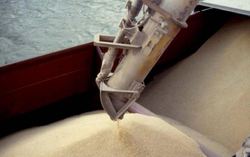 The bulker market from handysize to panamax vessels has been afforded some support by strong grain loadings from the Black Sea region. While that trend looks set to continue, the picture for US grains looks less rosy.

EXPORTS OF NEW CROP WHEAT AND BARLEY FROM THE UKRAINE ARE SAID TO BE AT RECORD LEVELS.

GRAIN shipments from the Black Sea region have been strong, a trend that is set to continue over the coming months.

Exports of new crop wheat and barley from the Ukraine are at record levels, according to grains consultancy BullPositions. That is providing some support to the handysize bulker market up to panamax-sized vessels.

The average weighted panamax time charter on the Baltic Exchange rose to $15,440 per day at the close on Monday versus $14,547 at the start of August.

The record volumes also come at a time when there are no capacity restrictions at ports, BullPositions' managing director Jesper Buhl said, adding that while the momentum for shipments is towards destinations in Asia, other buyers are based in Europe.

But there are still concerns for Russian supplies, and any shortfall from Russia will be compensated for by Ukrainian output, the consultant said.

“Heading deeper into the traditional peak export period of August and September, the export activity from the Black Sea is likely to be even more intense in the coming months and throughout the remaining parts of 2019,” he said.

Total exports of wheat and barley from the Black Sea amounted to 7.7m tonnes in July, versus 7.4m tonnes a year earlier, while the 2019/20 shipments from Russia, Ukraine, Bulgaria and Romania are expected at 74m tonnes, up from 72m tonnes in the previous season.

Meanwhile, the picture from the US remains bleak as trade tensions with China continue.

“With no truce in sight the post-harvest US soyabean export from both the US Gulf and the US Pacific is in harm’s way,” according to BullPositions.

“With the US Gulf accounting for the largest share of US soyabean exports and having the strongest seasonality swings, a significant share of US agricultural bulk exports from the US Gulf in the fourth quarter of 2019 and the first quarter of 2020 are at serious risk of having lost their main peak offtaker for the second year in a row.”

The US has increased sales to other areas such as Europe and Argentina, however.

Accumulated exports to the European Union rose to 7.6m tonnes in the current year from almost 5m tonnes a year earlier, the USDA figures show, while shipments to Argentina climbed to 1.9m tonnes from just 69,000 tonnes.

Exports from the US Gulf are expected at 18m tonnes in the fourth quarter, according to BullPositions. That is 1m tonnes lower than the same time last year.