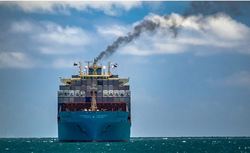 All eyes are currently on the 2020 sulphur cap — and for good reason. However, as the industry overcomes initial hurdles, fuel prices stabilise and the new rules simply become a part of life, attention must swiftly turn to eradicating greenhouse gas emissions. Simpler said than done, writes Anastassios Adamopoulos.

2020 is only the beginning of a long and difficult transition that will define shipping’s future.

GETTING TO A MINIMUM 50% REDUCTION IN TOTAL GHG EMISSIONS BY 2050 WILL REQUIRE DRASTIC CHANGES THAT HAVE TO BE MADE MUCH SOONER THAN THE 30-YEAR GAP BELIES.

SEVEN months away, everything but the date is still a question mark.

When the 0.5% sulphur cap comes into effect on January 1, 2020, how much will the different fuels cost?

Are crew ready to manage the switch to new very low-sulphur fuel oils?

Will authorities be capable of enforcing the new rules across the globe?

The state of play has certainly evolved since October 2016, when the International Maritime Organization made its decision to introduce the sulphur cap in 2020.

The IMO and industry bodies like the International Chamber of Shipping have offered guidelines for owners and operators to comply with the cap and for crews to handle the new fuels safely.

That is arguably a positive sign for everyone involved. However, it is questionable to how much of the global fleet it applies.

A high-profile fuel contamination case in 2018 — though completely unrelated to the 2020 sulphur cap — elevated concerns about a bunker supply chain that will be pumping out new, untested and unfamiliar fuels next year.

Earlier this year, the International Energy Agency projected that by 2020, more than 31% of marine fuel demand will be captured by heavy fuel oil and more than 45% will be marine gas oil, leaving just 23% for very low-sulphur fuel oils.

VLSFO popularity is expected to increase as time passes and the IEA anticipates it will account for 39% of fuel demand in 2024.

However, as that happens, familiarity with the fuels will increase and the jury should firmly be out on which fuels are trustworthy — and which are not.

The 2020 sulphur cap will be an abrupt change; but its distorting effect should be immediate and short-lived.

And, as that shock subsides, the industry will have to reckon with the inescapable fact that it needs to decarbonise — and the whole foundation of the marine fuels of 2019 and 2025 will be obsolete in two decades' time.

Since last year’s historic IMO initial greenhouse gas emissions reduction strategy, 2050 has become a milestone year in its own right and a symbol of the industry’s real and lasting energy challenge.

The overwhelmingly positive industry reception that has followed often comes with caveat: the strategy’s emissions targets are “ambitious”.

Depending on one’s perspective, that could be a testament to it or a warning about its feasibility.

The industry will attempt to meet the shorter-term targets slated for 2030 with operational efficiency improvements like speed reductions, while still using traditional and cheap fuel oils.

Yet the underlying point is the same. Getting to a minimum 50% reduction in total GHG emissions by 2050 will require drastic changes that have to be made much sooner than the 30-year gap implies.

Liquefied natural gas has been recognised by many of its supporters as a transitional fuel. The question has turned to whether it is worth investing in the development of a bigger bunkering infrastructure and an LNG-powered fleet that will not be able to meet 2050 targets alone.

SEA LNG chairman Peter Keller said during an event in London he believes that LNG, in combination with other efficiency gains, could potentially help the industry get to those 2050 targets.

However, that does not refute the fact that new fuels will be needed.

Biofuel popularity and exposure has grown with shipping majors like Maersk and CMA CGM giving them a high-profile vote of confidence, while there are also some efforts under way to deploy hydrogen.

Yet as ever the cost, the supply infrastructure and the overall GHG footprint, from upstream production to vessel consumption, will all play a role in deciding whether their development is worthy of investment.

A study conducted by UMAS and Lloyd’s Register earlier this year found that by 2030, there needs to be clarity around zero-carbon fuel production and supply and these fuels need to be financially competitive with conventional fossil fuels.

Technology and innovation will likely be a crucial factor for 2050 to succeed; but it will need powerful catalysts to do so.

Lenders have made a big point about favouring projects with a sustainable nature. Presumably then they should be willing to loosen their purse strings to fund research and development projects.

It would be more than just ambitious to expect the industry to attempt this without willing financing partners. Political support — or lack thereof — will also play an important role.

Policies crafted by the IMO and other regulators will affect what kind of technological innovation we get and will encourage those who hold the money to invest in them.

The 2050 target — and every other component of the IMO initial strategy — will be revised in 2023.

In four years’ time, 2050 may no longer be shipping’s signature date. However, that will not change the fact that alternative fuels have to be developed if shipping is to decarbonise in a timely manner.