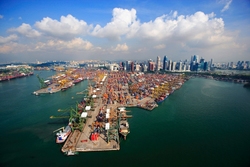 The port of Singapore recorded an increase in its container throughput in April over the year-ago period, while bunker sales went in the opposite direction and plunged by 12.3% year-on-year, according to preliminary estimates from the Maritime and Port Authority of Singapore (MPA).

In April, the port registered box volumes of 2.99m teu, an increase of 2.4% compared to 2.92m teu in the previous corresponding period, MPA data showed.

April’s throughout, however, dipped by 6% compared to 3.2m teu handled in March this year.

From January to April 2019, Singapore moved a total throughput of 11.93m teu, relatively stable compared to 11.78m teu achieved in the same period of last year.

Despite the relatively big drop in April sales, bunker trading sources spoken to by Seatrade Maritime News have expressed no major concerns over the decline and that sales are still considered strong at that level.

In the first four months, Singapore sold 15.78m metric tonnes of bunkers, down 7.9% compared to sales of 17.14m metric tonnes in the same period of last year.