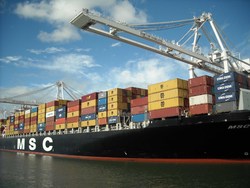 Interoperability will be a key element for the container shipping industry to transform and adapt to the digital era, according to Swiss-based shipping major Mediterranean Shipping Company (MSC).

MSC is one of the four founders of the Digital Container Shipping Association (DCSA) that was officially stablished in April last year.

Together with Maersk, Hapag-Lloyd and Ocean Network Express (ONE), MSC wants to create common information technology standards to make the industry more efficient.

World Maritime News spoke to Andre Simha, Chief Information Officer of MSC, on the container shipping industry’s response to DCSA since the partners first announced the cooperation on the matter.

“MSC has had extremely positive feedback from customers and vendors and DCSA itself has felt good vibes from a number of different carriers,” Simha revealed.

“The industry realizes that the initiative behind the DCSA is necessary in order to help all actors in the supply chain to become more efficient and improve interoperability.”

“Indeed, we predict that within a couple of years everyone will become more familiar with this word, which signifies such a crucial element of how we need to evolve as an industry: interoperability,”Simha, who is also the Chairman of DCSA, pointed out.

Specifically, the ultimate goals of the newly created association include simplification, efficiency for all and interoperability at various levels.

Speaking about the future of shipping and what the industry needs to change to get there, Simha said that the future “is really all about collaboration and simplification of some of the outdated processes in the industry.”

He added that standardizing the way in which we communicate with others in the industry is, in part, the way to achieve this.

When asked about the association’s plans on how to incentivize standardization besides the likely benefit of speeding up operations, Simha replied:

“The advantage of having major carriers on board is that we can ensure that the standards we create or adopt are actually implemented. This is the weak point of some of the other associations that do not have the capacity to implement their standards.”

“I believe part of the argument on standardization has already been won, among those who will be closest to the implementation of new digital industry standards, and I personally have been making the case for some time now. The DCSA will help to raise awareness of the benefits across a wider audience,” he said.

As explained by Simha, digitalization means many things to many people.

“At its core, it is all about revisiting tedious processes and where possible simplifying them and automating some to improve execution speed and allow staff to focus on better service to our customers,” he said.

When it comes to challenges in digitalization of business operations from MSC’s view, Simha noted:

“I have been through many different types and phases of digitalization over three decades of my career. The challenges today have crystallized as the necessity for digital standards.”

“As a carrier, MSC plans to ensure that the standards that the DCSA will embrace from existing initiatives, or produce afresh, will be implemented by MSC as a carrier,” he further said.

As previously announced, the association has no intention to develop or operate any digital platform.

“It’s more about ensuring that the ‘new’ digital collaboration platforms have the appropriate standards to begin with and ensure interoperability between them and the other actors in the supply chain. We all have to gain efficiencies in this mode,” Simha concluded.