Gap between potential and reality for LNG 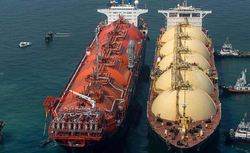 While the potential for FSRU development as a solution to liquefied natural gas supply issues in Southeast Asia is undeniable, the process of getting project approvals is less than straightforward in many cases.

FSRUs are relatively cheaper and easier to get operational.

THE potential of liquefied natural gas generally, and floating storage and regasification unit projects in particular, in archipelagic Southeast Asia is high, with seemingly perfect conditions for their adoption.

However, as in much of the developing world, there is often a gulf between promise and fruition.

Relatively cheaper compared with land-based LNG import plants, the FSRUs’ “plug-and-play” nature make them a good fit to meet the rapidly increasing needs for energy in these countries.

Alternately known as mini-LNG projects, these FSRUs can be put online in less than a year and typically cost about $200m to $250m, Mr van den Bosch noted.

For countries such Indonesia and the Philippines which have both easy sea access and a need for clean, cheaper energy to feed hungry power plants, they should be a no-brainer.

However, the rub lies in the fact that most of the places where these quite expensive bits of kit are needed are also in some of the riskier and less developed parts of the world.

Mr van den Bosch notes that many FSRU owners have recently shifted away from emerging and frontier markets despite this being where the demand is, mainly due to political instability, low credit ratings and country risk.

He cited the example of Höegh, which recently signed a second contract in Australia while pulling out of FSRU projects in Pakistan, Ghana and Chile.

Other than fundamentally, slowing electricity demand growth, problems at state-owned power company PLN as well as regulatory hurdles and the uncertainty caused by the merger of state-owned gas distribution firms PGN and Pertamina Gas are not helping.

Higher political and country risk is to be expected in these markets but the year ahead is complicated by impending elections in both Indonesia and the Philippines, the two countries that are most suited for mini-LNG projects.

Indonesia holds presidential elections in April while the Philippines has mid-term polls in May. The jury is out on how much of an impact this is having on investments, including in FSRUs.

Some have expressed optimism that the future Indonesian government could be more supportive of mini-LNG projects and this will bode well for FSRU project development, while others claim that investments had come to a standstill as early as seven months before the polls.

Meanwhile, in the Philippines, where LNG plant tenders, including one possible FSRU solution, are being considered, matters may be complicated by the presence of state-owned companies and big local business interests with good connections among the bidders.

To be sure, much is at stake. There is an urgency as the authorities in both countries look at a looming deadline of between 2021-2024 to get gas flowing to power projects.

Indonesia already has four LNG receiving stations and the MOL-led FSRU project to supply the Jawa 1 gas-fired power plant at Cilamaya is meant to come online by 2021. WoodMac’s Mr Johan noted five projects that PLN has at various stages of tender, with only one remotely close to being awarded.

The Philippines needs LNG import facilities to replace the piped gas from its domestic Malampaya field by 2024 when supply is forecast to run out.

While the benefit of FSRU projects is that they have relatively short timelines, one hopes the powers that be don’t leave it too late and risk letting the lights go out.