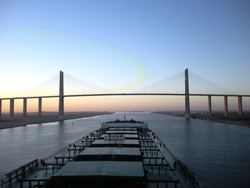 Ships returning to Asia from southern US east coast ports have two canal options from which to choose. In an effort to incentivise owners to select the eastbound route, the Suez Canal offers deep discounts on transit fees.

Egypt’s canal authority extends rebates to boxships on routes from the US east coast to compete against the Panama Canal.

THE Suez Canal Authority has extended a series of rebates designed to encourage boxship operators to utilise the waterway on the backhaul from the US to Asia.

For container vessels transiting from the US east coast ports north of Norfolk destined for Port Kelang or ports to the east, a 45% reduction will apply on normal canal fees.

The discount will apply until the end of June next year.

Discounts for dry bulk vessels transiting the canal en route between Australia and northern Europe, and from South Africa to the Mediterranean and Black Sea, have been extended until December 31.

The authority first offered a discount of 30% on canal fees for vessels using the Suez Canal from the port of New York and its southern ports heading to Asia, from March 7 through to June 5, 2016.

The discount was extended after an initial period, then increased in July. In January 2017 it was extended again and now appears to have become an almost permanent feature of the canal’s pricing policy.

Container vessels account for a third of all traffic through the canal.