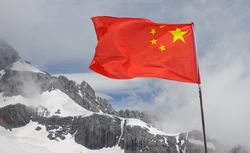 Not only is he unwilling to hold off on new round of hikes, but is also threatening to broadly expand tariffs to almost all Chinese imports.

US president undermines hopes of a ceasefire with Beijing, declaring it is ‘highly unlikely’ that he would accept an offer from China’s President Xi Jinping to avert new levies coming into force in the new year

IT COULD BE A COLD WINTER AHEAD FOR GLOBAL TRADE IF PRESIDENT TRUMP GOES FOR BROKE ON TRADE TARIFFS WITH CHINA.

PRESIDENT Donald Trump has cast more gloom on the global trading picture with a threat to hit the rest of China's imports to the US with tariffs.

In an interview with the Wall Street Journal, he said he expected to move ahead with boosting tariff levels on $200bn worth of Chinese goods to 25% from 10%.

He said it was “highly unlikely” that he would accept Beijing’s request to not impose the tariff rise and then upped the ante, suggesting that if he did not get the desired outcome for the US, he would also put tariffs on another $267bn worth of Chinese imports.

That would cover practically all goods that are not currently subject to import taxes, including Apple products.

Transpacific container freight rates have been at a premium due to front-loading as shippers rush to get goods to the US before new tariffs kick in, with eastbound spot rates at their highest in a decade.

Third quarter average rates on the Shanghai Containerised Freight Index for China to US trades were up by over a third.

The newspaper interview comes ahead of President Trump's meeting with Chinese President Xi Jinping on the sidelines of this week's G20 summit.

President Trump said that if the talks were unsuccessful, he would act on a previous threat to target additional Chinese goods with tariffs. “If we don't make a deal, then I'm going to put the $267bn additional on,” he told the WSJ.

The additional amount would be targeted with a tariff of 10% or 25%, he said.