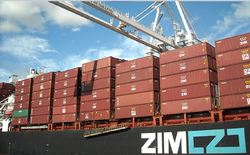 Despite rising peak season demand in the third quarter, Zim’s volumes were down 5.5% on the preceding quarter

ISRAELI container Zim has fallen to a net loss of $6.6m in the third quarter despite higher volumes, as the line suffered from rising fuel costs and weakening freight rates.

Despite rising peak season demand in the third quarter, Zim’s volumes were down 5.5% on the preceding quarter.

In its results statement, Zim said freight rates had decreased since the fourth quarter of 2017, while bunker prices as well as charter rates increased.

In the third quarter of 2018, freight rates started to recover in most trades but bunker prices continued to increase. Zim, however, appears to have been unable to capitalise on increasing rates during the quarter.

“The third quarter was characterised by freight rates increase and the continued rise in fuel costs,” said Zim chief executive Eli Glickman. “Zim’s results reaffirm its approach of coping with a challenging and volatile business environment.”

He added that Zim’s strategic operational cooperation with the 2M Alliance in the Asia-US trade was beginning to contribute to our overall results, and was expected to bear fruit in the coming quarters.

“We have a clear path forward, and we remain committed to providing innovative solutions for our customers,” Mr Glickman said.

For the first nine months of the year, Zim reported a net loss of $73.9m compared with a profit of $21.1m in the corresponding period last year.