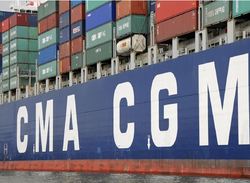 Four 6,927 teu vessels are expected to generate total EBITDA of $135m over the charter period for the owner that is in merger with CMA CGM’s spin-off Global Ship Lease.

CMA CGM has agreed to chartered in four containerships from Poseidon Containers at improved rates, expected to strengthen finances of the Greek owner that is in the process of merging with the French line’s spin-off Global Ship Lease.

The 6,927 teu quartet--Mary, Kristina, Katherine and Alexandra—would be fixed for a period of five years and were estimated to generate total earnings before interest, taxes, depreciation and amortization of about $135m for the owner, GSL said in an exchange filing.

The new charter of Mary had started recently, while the remaining three vessels would be delivered during the first half of 2019 after their existing charters expire.

The combined company would own 38 vessels valued at more than $1.2bn.

Commenting on the latest charter agreement, GSL chief executive Ian Webber said the company was pleased that the long-term charters with CMA CGM were “at levels substantially above their prior contracted rates”, with increased cash flow to improve GSL’s balance sheet and financial leverage.

“We are excited about joining forces with Poseidon Containers; as illustrated by these new charters, the combination will significantly increase our scale and ability to capitalize on favorable fundamentals in the mid-sized and smaller containership segments."