Scorpio to install scrubbers on majority of its fleet 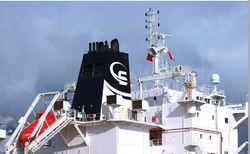 CEmanuele Lauro’s Scorpio Group will spread 100 hybrid-ready scrubbers across its fleet of 56 bulkers and 109 tankers.

SCORPIO Group has announced it is to install scrubbers to most of its fleet.

The shipowner will outfit nearly two-thirds of its fleet of 56 bulkers and 109 tankers with 100 hybrid-ready exhaust gas cleaning systems to comply with the International Maritime Organisation’s sulphur cap regulations.

Most of those installations will be completed before the new rules come into effect on January 1, 2020. A remaining third will be finished in the first quarter of 2020.

The company’s chief operating officer Cameron Mackey told a conference in Miami that the logic of removing sulphur from fuels on ships rather than using low-sulphur fuels did not sit right with him, but the economics were convincing.

“Intellectually, we do not agree, but there is a period where a scrubber is economically right,” he said.

The specific costs and how the 100 scrubbers will be paid for have not yet been determined.

“The company expects the aggregate capital investment of such retrofits to be material, but has not determined the exact costs or how such costs will be financed,” read a filing with the Securities and Exchange Commission.