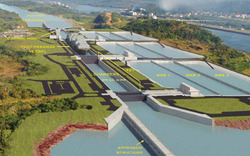 But South American waterway hopes Brazilian grain exports and US LNG can help fill the gap.

The Panama Canal anticipates reduce transits if the trade spat between the US and China continues to escalate, a top official has warned.

“Most cargoes passing through the Panama Canal come from or go to the United States and China,” Panama Canal Authority chief Jorge Quijano told Reuters.

“Tensions between them could ultimately have an impact on the amount of loadings using the waterway in any direction.”

US President Donald Trump is readying a list of $200bn in Chinese imports on which it plans to levy tariffs in coming days, stepping up the trade war between the world’s two largest economies.

However, the canal, which is a major source of revenue for the central American country, hopes Brazilian grain exports and US LNG can help fill the gap.

Brazilian soy has traditionally been shipped across the Atlantic and Indian oceans, but farmers in top soy state Mato Grosso earlier this year signed a memorandum of understanding with the canal to look at ways to cut transport costs and increase grain volumes using the waterway via ports in the north of Brazil, according to Reuters.

About 2mt of Brazilian soy went through the canal last year, out of annual soy exports of around 60 million tonnes, Brazilian data shows.

“If China eventually imports less LNG from the US, we will see more imports from Japan, Korea and Mexico, which would compensate,” said Quijano.

For LNG exports, almost 90% passing through the canal comes from the US, according to figures from the Panama Canal Authority.