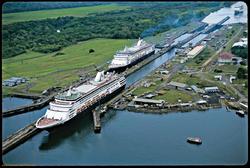 Panama Canal locates in the narrowest part of the American continent and it was constructed by the United States of America from 1904 to 1914 and is still one of the most amazing engineering marvels of the world. The Canal makes a possibility of easy and trustworthy crossings from the Atlantic to the Pacific. Ships throughout the world are built to fit the locks that are part of this 80 Km (50 mi) long waterway, which can be visited any time.

As inauguration of the newest Panama Canal in 2016, interest from logistics and trade professionals has reached a state of extreme excitement. The over $5bn project increased ship capacity upwards of 50% with the largest ships now carrying up to 13,000 shipping containers, larger volumes of electronics, grains and other commodities to bring Eastern and Western markets closer together.

In line with this, the Panama Canal has set a new monthly tonnage record, handling 38.1 million tons of cargo in 2018. This demonstrates the third time the Canal registered a new monthly record since its expansion in 2016 as it facilitated the transit of 1,231 ships last month.

Now, there is time to turn to another point of discussion that focuses on the trade war between the two leading economies of the world, i.e. the U.S. and China. Concern over a trade war flared afresh as Washington said it still held the threat of imposing tariffs on $50 billion of imports from China.

American port operators to guarantee that goods get to the U.S. stores with relative speed have rooted one reason for China’s success in dominating the market share in the U.S. in investment. If there is a reduction, in trade activity at U.S. ports, dockworkers, truckers and others could be hit hard. The West Coast ports are significant for agricultural products worth billions of dollars annually, including nuts, fruit and meats.

The U.S. ports and shipping sector have lots of concerns for potential impacts from the ongoing trade dispute with China that some economists warn could lead to layoffs and a drops in container traffic in general and in the Panama Canal in particular.

In line with this, one of the most outstanding issues to be considered is the circumstances created by imposing heavy tariffs on container segment.  Moreover, the influence could be felt especially hard in agriculture-related cargo since it is worth billions of dollars annually to major West Coast ports.

On the other side of the coin, barge operators that haul bulk targeted by China and railroads could be affected as well and bring about difficulties in panama waterways.

China in turn imposed a 25 percent tariff on the U.S. along with a new 15 percent duty on other kinds of agricultural products, including fresh fruit, almonds, dried fruit and wine.  Overall, the U.S. agricultural exports to China represent almost $20 billion annually for American farmers.

The report aims to state that the West Coast ports are the most exposed areas of the trade war especially in the Panama Canal waterway. However, widening of the Canal and the West Coast ports labor disputes in previous years also has led to more cargo going through the East Coast ports so the impact could be less than it might have otherwise been.

At the meantime, some high value U.S. fruits such as berries use airfreight so that sector also could see some shipments curtailed.

Data published from IHS Markit demonstrates that approximately 7 percent of the U.S. container trade with China is at risk. Besides, the first round of tariffs that went into effect has already affected around 3.1 percent of containerized U.S. exports.

The top agricultural commodities transited from the Los Angeles and Long Beach ports to China include oilseeds such as soybeans, various grains, nuts, fruits, dairy products and meats.

Harbor channels at Atlantic ports in the southern U.S., are being deepened to operate bigger ships moving through a widened Panama Canal. Cranes are being heightened to unpack the larger stacks of containers; new ship berths and expanded rail hubs are opening the door wider for the imported goods demanded by American consumers and businesses but unfortunately, all of them are affected by the imposed tariffs and would directly cause the traffic volume to reach its lowest levels.

Exports on the other hand are on the rise too, and could be improved if Donald Trump strikes deals to export tens of billions of dollars in commodities and energy to China in an effort to cut America’s $375 billion trade deficit with the world’s second largest economy.

“China is where the growth is,” said South Carolina Ports Authority chief executive Jim Newsome. “I don’t think the world can function without free trade ... The global supply chain is based on trade and I don’t think you can walk that back.”

Interviews with officials at key southeastern ports as well as federal employment data demonstrate a piece of the U.S. trade puzzle often lost in the back and forth among national policymakers amid talk of tariffs and import restrictions.