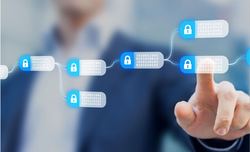 The much-feted tie-up between Maersk and IBM will continue as a collaboration rather than a joint venture but ports, freight forwarders and customs authorities have signed up as early adopters.

Box shipping and tech giants have 94 partners lined up in blockchain trial, but only one other carrier has put its hat in the ring.

PACIFIC International Lines has joined Maersk and its subsidiary Hamburg Süd as one of the key carriers in Maersk’s ambitious plan to provide a gateway blockchain product for the container shipping sector.

The launch of TradeLens, the project Maersk and IBM have been working on since their collaboration was announced in January, sees the three carriers joining forces with 20 port and terminal operators, customs authorities and logistics companies around the world in piloting the platform.

Maersk and IBM had previously said they would form a joint venture company to promote TradeLens, but have now said they will continue their pre-existing collaboration agreement instead.

TradeLens is based on IBM blockchain technology and lets partners collaborate by establishing a single shared view of a transaction without compromising details, privacy or confidentiality, Maersk said in a statement.

Maersk and IBM said the two companies had worked on the trial for 12 months in order to identify opportunities to prevent delays caused by documentation and information delays.

“Through better visibility and more efficient means of communicating, some supply chain participants estimate they could reduce the steps taken to answer basic operational questions such as ‘where is my container’ from 10 steps and five people to, with TradeLens, one step and one person,” Maersk said.

The respective heavyweights of container shipping and computing hope to set standards for blockchain transactions in the supply chain that will be adopted by the entire industry in an effort to bring wider usage of the technology.

But some carriers have insisted that any standards need to be set by an independent body rather than a major competitor and have suggested carriers form an industry-wide body along the lines of INTTRA to promote and develop blockchain in the supply chain.

The fact that Maersk and IBM have managed to gain only one small regional carrier in their trial indicates that other lines remain to be convinced of the idea of the world’s largest container line dominating the conversation over blockchain.

Others remain wary of the concept entirely. In May, Hapag-Lloyd chief executive Rolf Habben Jansen described blockchain as “disaster” that lacks industry standardisation and will “burn money and gain nothing”.

“What is the governance for an industry-wide platform?” he said. “It cannot just be one company saying, ‘I have an industry platform, but I control it.’”

TradeLens is expected to be made fully commercially available by the end of this year.