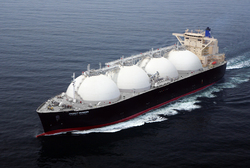 China has added US LNG to its list of products liable to a potential 25% import duty if the US follows through on threats to expand its existing round of tariffs on Chinese exports, according to an announcement Friday by the Customs Tariff Commission of the State Council.

The move by Beijing comes in response to US President Donald Trump’s decision earlier this week to explore the possibility of 25% tariff on $200 billion worth of Chinese products as the trade war between China and the US continues to escalate. US LNG imports into China do not attract any duty currently.

The trade war between the US and China escalated in June when China announced an additional 25% tariff on $50 billion worth of US goods, including energy and agricultural products. But LNG, demand for which is rising in China, was not on the list. China is on track to become the largest buyer of US LNG this year. It has imported more than 1.25 million mt to date this year, compared with 1.61 million mt in the whole of 2017, behind Mexico and South Korea, according to data from S&P Global Platts Analytics.

China became the largest contributor to global LNG consumption growth in 2017. It surpassed South Korea as the world’s second-largest LNG importer and its share of global LNG demand is expected to rise to the same level as Japan’s by 2030.