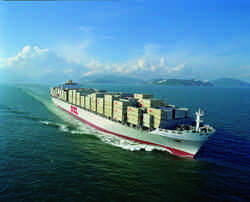 Total revenues and liftings increased by 4% and 4.6% year on year, respectively, in the three months. But the pace was slower when compared to the same period of 2017

Average revenue per teu edged down by 0.6%, a reflection of weakened freight rates. REVENUES and cargo volume at Hong Kong-based Orient Overseas Container Line continued to grow in the second quarter of this year, albeit at slower pace amid tougher market conditions.

Total revenues in the three months increased by 4% year on year to $1.5bn, while total lifting volume rose 4.6% to 1.7m teu, according to the carrier’s latest operational update. The growth rates were 6.6% and 23.8%, respectively, in the same period of last year.