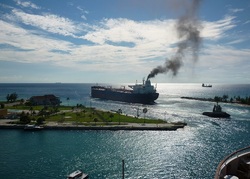 With the IMO’s 0.5% sulphur cap fast approaching, the Korean Register is registering a rising demand for scrubbers on new tonnage because there are high risks associated with low-sulphur fuel oil.

Earlier adopters of scrubbers are expanding the installations onto their entire fleet, says KR senior surveyor Hyun-Tae Kim SHIPOWNERS have increasingly opted for scrubbers to meet the 2020 sulphur regulations when ordering new tonnage, according to the Korean Register.

More than 60% of the newbuildings, or about 90 units, placed at South Korean shipyards for the first half of this year included scrubbers. This represented a sharp rise compared with a share of only 25% between 2016 and 2017, Hyun-Tae Kim, senior surveyor for the Korean Register, told a seminar in Singapore on Thursday.

Most of the scrubbers were fitted on bigger vessels, such as very large crude carriers, but installations on middle range tankers have also increased, he noted. Yard capacity remained a challenge, as the early adopters — such as the cruise lines — who started to use scrubbers as early as 2009, are now expanding to install the devices to their entire fleets. “If they had a lot of trouble in the operation of scrubber systems, they would not extend the installation of scrubbers to the rest of their fleet,” Mr Kim said. “It looks likely that more shipowners will opt for scrubber technology to remove sulphur from the fuel when it is burned as uncertainty remains about low-sulphur fuel oil availability and potential operational complications.” Mr Kim pointed out that there was no guarantee of being able to buy identical types of low-sulphur fuels at different locations, which could lead to problems when the fuels were blended.

“There is not an international standard at the moment for low-sulphur fuel oil and although the International Maritime Organization has requested the International Organisation for Standardisation to develop this, it will not be ready until 2022.” Even if ships are allowed to use a non-compliant bunker when qualified fuels are not available at a port, the de-bunkering operation they will have to conduct when reverting back to compliance would also create issues, Mr Kim said.