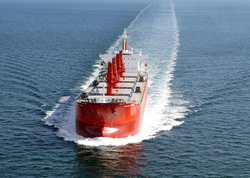 Any negative impact on the dry bulk trade from trade wars will be largely outweighed by the positive dry bulk supply fundamentals and continued global dry bulk trade growth overall.

Headlines about trade wars overlook the fundamental fact that global dry bulk demand is in solid growth mode, says Pacific Basin’s chief executive Mats Berglund IMPROVING dry bulk supply fundamentals will outweigh any negatives to the demand-side from threats of ever-escalating trade wars, according to Pacific Basin. “The conflict between the US and its key trading partners might get resolved but may also escalate,” its chief executive Mats Berglund said. “This uncertainty weakens sentiment, which could undermine trade. A global trade war could impact global GDP and dry bulk demand. “However, we continue to believe that any negative impact these protectionist actions have on the dry bulk trade will be largely outweighed by positive dry bulk supply fundamentals and continued global dry bulk trade growth overall.” Minor bulk tonne-mile demand is expected to expand by 4% this year, he said, citing Clarksons’ data, while the combined handysize and supramax net capacity growth should come in at about 2%. Pacific Basin owns and operates mostly in the minor bulk segment, carrying bauxite, nickel ore, grains and forestry products, among others. The US-China trade tariffs have so far had a negligible effect on the company’s shipments, the executive said, adding that volumes, as is the case with soyabeans, have shifted rather than ceased. Chinese imports of dry bulk commodities were seen as a key driver for higher dry bulk earnings. According to Affinity Research, China’s coal imports should be strong in the second half. A heatwave has depleted hydro-power generation, forcing the country to turn to coal for electricity, it said, adding that restrictions during the winter months on coal mining in order to cut pollution may once again be put in place later this year, requiring imports. In the first half, thermal coal imports rose 20% to 117m tonnes, according to Banchero Costa. Russia has been increasing coal supplies to China, with volumes up 27% to 10.3m tonnes in the first half, it said, citing Reuters. But coking coal imports declined by almost 20% to 29m tonnes, Bancosta said, despite a rise in steel production. That is due to steel mills using higher iron ore quality, which cuts the need for coking coal. China’s steel production rose 7.5% to 80.2m tonnes in June versus a year earlier, the World Steel Association said this week. China’s steel exports to other countries fell as steel production was also boosted in places such as India, Japan, and South Korea, according to data assembled by the association. Bancosta noted that steel exports fell by 13.5% to 35.5m tonnes in the first half. Corn imports into China meanwhile increased 201% to 2.2m tonnes in the first six months of this year versus the same period in 2017, Bancosta said.
0
Visit Home
Send to friends
Print
Newsletter
Share this news