Port of Long Beach Has Busiest Month Ever in June 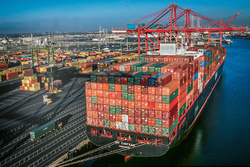 Container cargo volumes reached record heights at the Port of Long Beach last month, surging past the previous mark and distinguishing June 2018 as the Port’s best month ever.

Port officials reported Friday that trade increased 14.2 percent in June, compared to the same month in 2017. The Port’s terminals moved 752,188 twenty-foot equivalent units (TEUs), 4.4 percent higher than the previous “best month” record set in July 2017.
Through June, the Port has handled nearly 4 million TEUs so far this year, 14.5 percent above the pace set by 2017, the Port’s busiest year ever. June also capped the Port’s best second quarter — dockworkers processed almost 2.1 million TEUs, 10 percent more than the corresponding quarter a year ago. The prior high was set in the second quarter of 2006.
“We are on track to beat our historic pace from 2017,” said Port of Long Beach Executive Director Mario Cordero. “The domestic and global economies are good, which is why we’re seeing all of this activity. Certainly the escalating trade tensions have everyone in the industry concerned, but we’re going to continue to provide excellent customer service and fulfill our mission of facilitating commerce.”
“We’re pleased to see cargo moving efficiently, even as record volumes continue. With the Port getting ready to enter the peak season and retailers replenishing their stocks for the holidays, it’s great to see these volumes and the smooth flow of goods,” said Harbor Commission President Lou Anne Bynum.
Imports in June were up 14.5 percent to 384,095 TEUs. Export TEUs numbered 135,168, growing 14.3 percent. Empty TEUs shipped overseas to be refilled with goods totaled 232,926, a 13.6 percent increase.
Chinese imports to U.S. ports rose more than expected last, suggesting that some importers may be trying to protect themselves from the intensifying trade war that could impact the transpacific trade between U.S. and China.
0
Tags: long beach south korea 2018 container volume
Visit Home
Send to friends
Print
Newsletter
Share this news