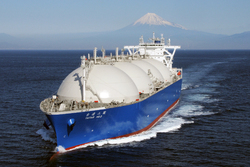 China will overtake Japan as the world’s largest gas importer by the end of this decade when pipelined gas is included, the Paris-based energy watchdog forecasts. On the supply side, US will lead the expansion in export capacity

THE International Energy Agency has forecast an approximate 20% growth in global liquefied natural gas trade for 2018-2023, driven by rising liquefaction capacity in the US and rapid demand expansion in China.

More than 80bn cu m capacity is due to come onstream in the US, followed by 30bn cu m in Australia and 15bn cu m in Russia.

With limited pipeline expansion, the share of LNG in the total gas trade is forecast to be almost 40% in 2023, compared with a third in 2017.

Gas demand in China is expected to grow by 60% between 2017 and 2023, driven by Beijing’s coal-to-gas policies aimed at reducing local air pollution, according to the IEA. Most of the demand growth will be met by LNG imports.

China alone will account for 37% of the global gas demand growth in the next five years, the IEA said.

When pipeline imports are included, the country will overtake Japan as the world’s largest gas importing country by 2019, the IEA added.

The IEA has also predicted strong growth in gas use in other parts of Asia, including in South and Southeast Asia, with strong economic growth and efforts to reduce air pollution.

Overall, industry will account for over 40% of in global gas demand expansion in the five years to 2023, according to the IEA, followed by 26% for power generation.

“China is set to become the world’s largest gas importer within two-to-three years, US production and exports will rise dramatically strongly and industry is replacing power generation as the leading growth sector,” the IEA’s executive director Fatih Birol said.

However, the IEA added that a lack of new LNG liquefaction projects after 2020 could lead to a tightening market.

“Without new investment, the average utilisation rate of liquefaction is likely to return to its pre-2017 level by 2023,” the IEA report said. “Owing to the long lead time of such projects, investment decisions need to be taken in the next few years to ensure adequate supply beyond 2023.”

Mr Birol said: “While gas has a bright future, the industry faces tough challenges. These include the need for gas prices to remain affordable relative to other fuels in emerging markets and for industry to curb methane leaks along the value chain.”

For gas price to be competitive for the long run, the industry needs market evolutions and reforms, such as the development of trading hubs, opening of retail business to competition and fair access to infrastructure, the IEA said.

As gas demand has been driven by pollution reduction efforts, the gas industry’s ability to cut methane emissions and expand its deployment of technology to capture, utilise and store carbon will be crucial for its prospects, the IEA added.