Iran Has a Valuable Contribution to Realization IMO goals 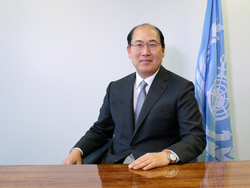 The initial strategy on reduction of Greenhouse Gas (GHG) Emissions adopted at the meeting of the International Maritime Organization’s (IMO) Marine Environment Protection Committee (MEPC 72). Reducing GHG from shipping is crucial to tackling climate change. In order to collect more on this issue and other important issues in the shipping industry, MANA correspondent conducted an exclusive interview with IMO Secretary-General Kitack Lim, You will browse the transcript of this interview in the upcoming section.

In this year, Our Heritage – Better Shipping for a Better Future is a theme which has been selected by IMO for World Maritime Day, what is your prediction about the future of shipping industry?

It is of course impossible to fully predict the future. But we can say with certainty that shipping will continue to be needed to transport commodities and goods around the world, as it has done for centuries. We have seen trade by ship rise considerably in recent decades and the world saw trade by ship increase to 10.6 billion tons in 2017. So in my view, shipping will continue to be the backbone of world trade.

We know that there is an increasing pressure for shipping to be greener and more sustainable. So the industry needs to consider how it can support the Sustainable Development Goals and help achieve the targets under those Goals. The Initial IMO GHG Strategy, for example, sets a clear vision for reducing GHG emissions, so the industry should be considering how it might invest in low carbon fuels and ships in the future.

There will also be challenges, such as dealing with increased automation, digitalization and cyber security.

I am convinced that IMO will remain the right global forum where all issues related to global shipping, that come under IMO's remit, should be discussed. The challenges and opportunities will become clear.

2)    Nations meeting at the International Maritime Organization adopted an initial strategy for the reduction of greenhouse gas emissions from ships. In order to achieve this goal, what stringent measures should be put into place?

The Initial IMO Strategy on the reduction of greenhouse gas emissions from ships, adopted in April 2018, sets out the vision to reduce GHG emissions from international shipping and, as a matter of urgency, to phase them out, as soon as possible in this century.

The Initial Strategy represents a framework for action by IMO for the coming years and includes a list of candidate short, medium and long-term measures that may be needed to achieve the levels of ambition, with possible timelines. These will be discussed and considered for possible adoption.

It's impossible to say at this stage which of them will be adopted.

Possible short-term measures (2018-2023) include further improvement of the already-adopted mandatory framework for energy efficiency of ships, including the ship Energy Efficiency Design Index (EEDI) for new ships (built since 2013) and the Ship Energy Efficiency Management Plan (SEEMP) for existing ships.

Analysis of the use of speed optimization and speed reduction as a measure is included in the list of candidate short‑term measures; along with research and development activities addressing marine propulsion, alternative low-carbon and zero-carbon fuels, and innovative technologies to further enhance the energy efficiency of ships.

Ports are also mentioned as important stakeholders than can facilitate the reduction of GHG emissions from shipping, such as through the provision of ship and onshore power supply from renewable sources, infrastructure to support supply of alternative low and zero-carbon fuels and the optimization of logistics chain planning.

Possible long-term measures (beyond 2030) are identified as pursuing the development and provision of zero-carbon or fossil-free fuels to enable the shipping sector to assess and consider decarbonization in the second half of the century; and encouraging and facilitating the general adoption of other possible new and innovative emission reduction mechanism(s).

The next step is that an intersessional working group meets later in 2018 to develop a programme of follow-up actions to the Initial Strategy and to further consider how to progress the reduction of GHG emissions from ships. The outcome of this intersessional working group will be reported to the Marine Environment Protection Committee's next session in October 2018 (MEPC 73).

3) What measures will be taken by IMO for fighting against pirates?

Piracy and armed robbery against ships have been on IMO's agenda since the early 1980s. Initially the focus was on West Africa, then the South China Sea and the Straits of Malacca and Singapore. More recently, since 2005, has IMO focused on piracy off the coast of Somalia as well as the ongoing situation in the Gulf of Guinea.

Civil and military operations in waters off the coast of Somalia have been major factors in containing piracy and I commend the contribution of countries, including the Islamic Republic of Iran, in providing naval assets in the region.

IMO is currently helping Member States to develop and implement national and regional measures to address the threat of piracy, armed robbery against ships and other illicit maritime activities, thus enhancing maritime security in both the Gulf of Aden and western Indian Ocean area .

With support and cooperation from the shipping industry, IMO has developed and adopted a number of anti-piracy measures and practices for use on ships which have helped mitigate the impact of piracy, worldwide. These include guidelines for armed security teams and for the investigation of offences.

4  To what extent can Iran contribute to successful realization of IMO goals?

As an IMO Member State, the Islamic Republic of Iran has a valuable contribution to make. First by participating at IMO meetings and contributing to the debates and technical discussion at the IMO fora, such as the technical meetings of the committees and sub-committees as well as other events and meetings.

Like a number of other cuntries, the Islamic Republic of Iran has shown its commitment to be an active participant in capacity‑building projects. For example, the Islamic Republic of Iran was one of six developing countries in the first phase of the IMO-executed Global Ballast Water Management Programme (or GloBallast for short), leading to the adoption of the International Convention for the Control and Management of Ships' Ballast Water and Sediments, 2004.

The Islamic Republic of Iran has also hosted national and regional workshops to train participants in implementing IMO measures and has nominated its officials to attend courses and workshops elsewhere.