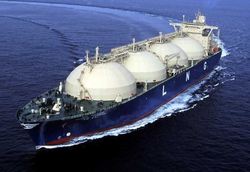 The tide has now shifted now shifted for US LNG exports resulting in a reshaping of global shipping flows.

According to US consultancy RBN Energy, reported by MANA correspondent “Three years ago, US lower-48 LNG exports were zero. Today that number is above 3.0 Bcf/d.” This equates to roughly 14m tons of LNG, if annualised. Consultants McKinsey, in their Feb. 2018 Energy Insights newsletter, wrote: “this rise in US exports has already begun to change the global LNG flow patterns: US LNG has reached European markets where it has displaced Middle Eastern supplies, and some volumes have already reached Asian markets.”
They forecast the US having capacity to export 52m tons of LNG in 2022, compared to approximately 14m tons annual capacity at end 2018.
RBN’s recent analysis makes important distinctions about the nature of US LNG compared to that from competing exporters. They describe most LNG liquefaction plants around the world as “being built in producing regions where the only viable market alternative for gas production is expensive liquefaction and export.” Compare that with the States, where “US natural gas supplies have numerous alternatives: domestic demand, storage, pipeline export (to Mexico or Canada), or export in the form of LNG.”
McKinsey’s experts paint a different visage of the same dynamic, describing the US as a provider of “flexible LNG supplies at scale” that can move to either Europe or Asia, with shipping costs being an important driver of the ultimate destination.
The McKinsey analysis, showing continued growth in the years ahead for LNG trades, not surprisingly, fueled heavily by China, bears this out. The consultants suggest that, by 2022, “The total import deficit in the Pacific, therefore, will amount to 70m in the Pacific basin” and that “This 70m tons LNG supply shortfall in the Pacific basin will be fulfilled by incremental LNG supply from the Atlantic basin - thus opening the space for the US to play a greater supply role.” Yet, for reasons explained by the consultants, these export molecules will be less likely tied to long term contracts.
The various shipping entities are acknowledging this shift Dynagas Partners LP, the listed Procopiou entity, albeit having a preference for term coverage, explained in a recent regulatory filing: “Most shipping requirements for new LNG projects continue to be provided on a multi-year basis, though the level of spot voyages and time charters of less than 24 months in duration has grown in the past few years.”
In a similar filing, Gaslog explained: “GasLog Partners and GasLog continue to pursue opportunities for new multi-year charters with third parties for the remaining open vessels and, on an interim basis, may consider trading the vessels in the spot market, pursuing the most advantageous redeployment depending on evolving market conditions.”
GasLog vessels in the spot trades operate in the “Cool Pool” alongside those of Dynagas Ltd, the privately held Procopiou entity, and Golar LNG.
0
Visit Home
Send to friends
Print
Newsletter
Share this news