The boxship leader board: It's not just a matter of scale 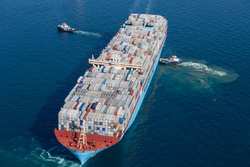 Maersk takes pride in its leadership status but is MSC now keen to share that role?

MAERSK and Mediterranean Shipping Co have always been unlikely bedfellows, thrown together in the 2M alliance more through necessity than any genuine compatibility.

Superficially, they may appear to have plenty in common, both in terms of scale and geography, as well as family control.

But those in the know point to their very different corporate cultures and business philosophies.

Maersk likes to consider itself as industry leader, not just in terms of fleet capacity and market power, but also through ideas, innovation, transparency, and a willingness to speak up on matters that concern all container lines. The group’s chief executive Søren Skou is head of the elite Box Club whose members are restricted to container line chairmen and chief executives.

MSC, on the other hand, has always preferred to stay out of the limelight and not get too involved in issues beyond its own immediate company interests and ambitions.

But is that power balance subtly shifting?

In recent weeks, it has been MSC that has made the first move, whether in the announcement that it was halting its Iran services or imposing emergency bunker surcharges.

And now, MSC is the one pressuring Maersk to have a complete rethink about the 2M network amid rising fuel prices, declining reliability, and first quarter financial losses.

MSC Group president and chief executive Diego Aponte reckons the best way to tackle all three issues is to operate ships at reduced speeds in order to put a little more slack in the system, while also cutting fuel consumption and so helping to improve financial returns and ship emission levels.

MSC has already taken action where it can in the services it controls, and now wants its 2M partner to follow suit.

Maersk, of course, is caught up in a huge restructuring exercise as it brings its container shipping, ports, and logistics companies in to a single business unit, and may just have been a little slow off the mark on other matters in which it would usually have been expected to take the lead.

But here is another irony.

By deciding to create a unified transport and logistics business, Maersk is following in MSC’s footsteps to some extent.

For the Geneva company already operates its container line, terminals and inland transport businesses in a far more integrated way than Maersk has done in the past.