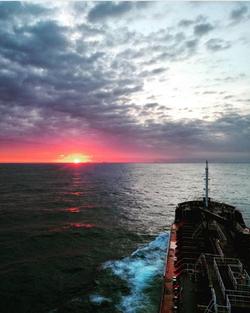 There was firm sentiment at the start of the week on MEGEast routes, with rates rising to WS 50, but sentiment eased as the week went on, and the rate on the Gulf-Japan route closed at WS 48. Elsewhere, there was sufficient enquiry in the Caribs to maintain the lump sum rate on the Caribs- Singapore route w-o-w at $4m. With Posidonia in full swing this weekend, a quiet start to next week is likely.

In the Med, after a rise in Suezmax rates last week due to a firmer Aframax market, the Suezmax market softened this week as Aframax rates fell and the tonnage list grew in the region. Rates also fell w-o-w in WAF.

It was a slow week in the Med/Black Sea, with the tonnage list replenishing and allowing charterers to undermine some of last week’s rate gains. Meanwhile, the market didn’t really get going in the North Sea/Baltic, and as a result the rate on the UKC-UKC route fell w-o-w to WS 105. 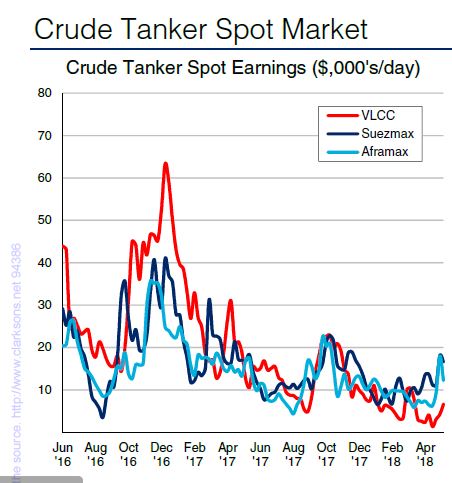 West of Suez: It was a very active week, although this largely did not translate into a rise in rates. In the MR market, the rate on the UKC-USAC route fell significantly w-o-w, dropping to WS 117.5 due to available tonnage outweighing enquiry following substantial activity last week.

East of Suez: There was virtually no activity this week, with rates generally falling, although the full extent of the decline in rates remains to be seen next week.

The Handy market in the North Sea firmed this week onthe back of increased activity and a lack of tonnage caused by delays. The rate on the UKC-UKC route rose w-o-w to WS 170, 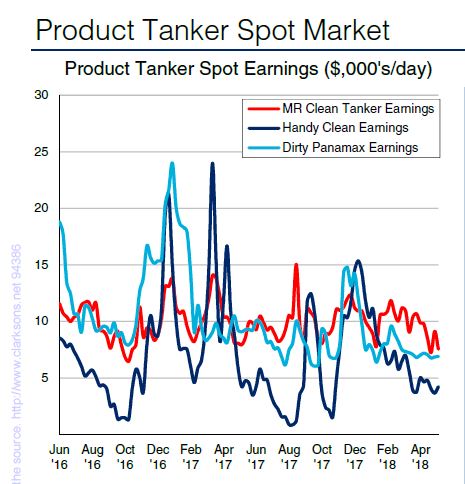 The Capesize market softened further early in the week, as long tonnage lists continued to weigh on rates and a number of public holidays dampened activity. However, activity increased significantly towards the end of the week, with rates ending up w-o-w by Friday. Overall, Capesize spot rates rose 27% w-o-w to $11,358/day. 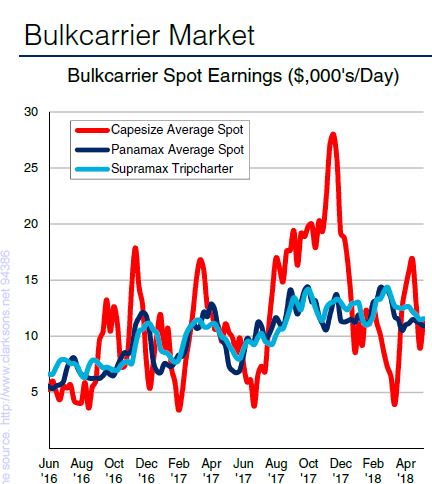 The boxship timecharter market remained busy in May, with a strong demand for tonnage stemming in particular from Eastern based carriers, and with plans made over the last several months continuing to be carried through despite freight rate concerns on some trade lanes. Liner supply/demand projections remain largely conducive to a stable market over the next 12-24 months, although some pressure is building on existing c.8,000 TEU ships in the run up to summer. Vessels in the c.5,500-7,500 TEU size range saw rates firm, as deployment opportunities for these ships continue to diversify onto the non-mainlane trades. Meanwhile, ‘old Panamax’ units have remained firmly in favour as alternatives to traditional c.1,700-3,000 TEU ‘feeder’ vessels where volumes allow. Looking forwards, the fundamentals still point to further demand for tonnage in the coming months, although the return to the charter market of some of the relatively quieter carriers may be needed to catalyse the upside. 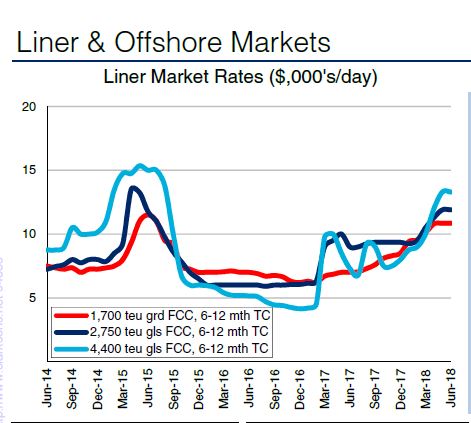 In the tanker sector, Guggenheim Capital has doubled their orderbook at DSME by declaring options for 2 x 300,000 dwt VLCCs. The recently declared options are scheduled for delivery in 2H 2020. Elsewhere, there are two orders to report in the shuttle tanker sector. AET Tankers have placed an order for 4 x 152,700 dwt Suezmax shuttle tankers at Samsung HI, all of which are scheduled for delivery in 2020. The DP2 units have reportedly been ordered against long term charter to Brazilian oil company Petrobras. Meanwhile, Russian yard Zvezda Shipbuilding has won a contract from domestic owner Rosnefteflot, a subsidiary of Rosneft, for 1 + 1 x 69,000 dwt ice class Arc6 shuttle tanker. The firm vessel is due for delivery in 2021. Elsewhere in the gas carrier sector, Samsung HI has received an order from GasLog for one 180,000 cu.m. LNG carrier. Upon delivery, scheduled in Q3 2020, the vessel will reportedly be chartered to Centrica. 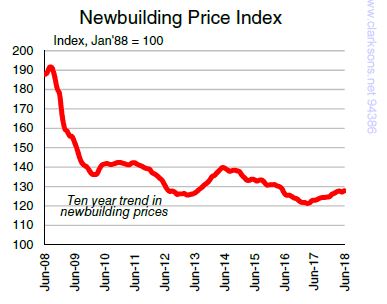 The recycling market almost came to a halt this week, with very little appetite to acquire tonnage in the Indian Subcontinent as a result of Ramadan, and most of the shipping industry beginning to prepare for their travels to Greece for Posidonia. This has resulted in very little new tonnage entering the recycling market, with only private negotiations taking place. 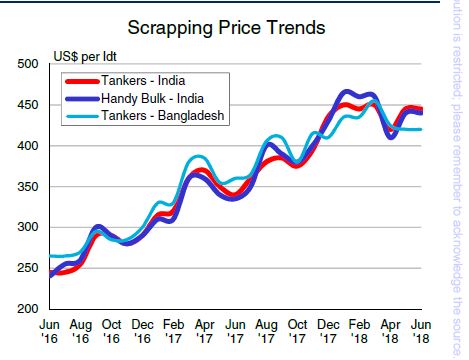 US tariffs on imports of steel (25%) and aluminium (10%) from the EU, Canada and Mexico have been implemented following the end of temporary exemptions on 1st June. US seaborne steel imports totalled 30mt in 2017, with 5.1mt (17%) and 1.7mt (6%) shipped from the EU and Mexico respectively. In response, the EU, Canada and Mexico have announced tariffs on imports of a range of US goods. While the impact on dry bulk trade is expected to be limited, retaliatory tariffs of 25% on EU imports of US steel (0.2mt in 2017) and maize (0.9mt in  2017) could cause some disruption to trade flows. Full details of Mexico’s retaliatory action have not yet been released, but steel imports from the US (c.1mtpa seaborne) are likely to be included in any response. 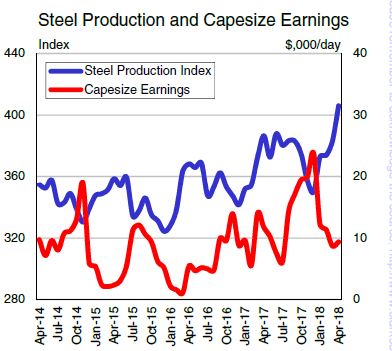