VLCCs:
The VLCC market saw rates decline further this week due to subdued activity levels, and despite some slight resistance from modern tonnage, efforts to counteract the poor sentiment were in vain. It was quiet week in WAF, and the MEG has been drip fed enquiry which was quickly absorbed by the oversupply of tonnage. However, the Caribs market has shown some promise, with some activity and delays in the USG thinning the tonnage list.
• Suezmaxes:
Despite a busy week, rates remain soft. Rates on routes ex-WAF have fallen w-o-w as tonnage supply continues to outstrip demand. In the East Med/Black Sea, Aframaxcargoes are starting to pick off Suezmax tonnage. The rate on the Black Sea-Med route now stands at WS 60.
• Aframaxes:
It was a busy market in the Med this week, with many ships being fixed away. Rates on Med/Black Sea-Med voyages now stand at WS 110. Meanwhile, things in the North Sea/Baltic didn’t really get going this week and the rate on the Baltic-UKC route fell w-o-w to WS 87.5. 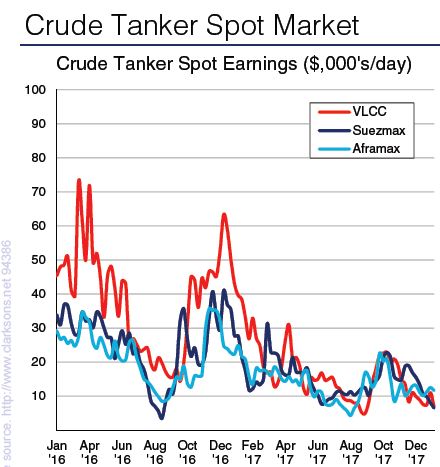 Capesize:
It was a more positive week in the Pacific with rates recording gains. In the Atlantic, rates ex-Brazil held fairly steady whilst the North Atlantic market felt largely flat.
• Panamax:
The Pacific market had a fairly positive week, supported by a healthy volume of SE Asia mineral cargoes, although activity slowed towards the end of the week. The Atlantic market was also active in the early part of the week, although rates generally held fairly steady w-o-w.
• Handy:
The USG Supramax market softened slightly, and rates ex-Cont eased back. In the Pacific, the outlook became more positive, with some signs of improvement apparent in North Asia, supported by Chinese steel cargoes. 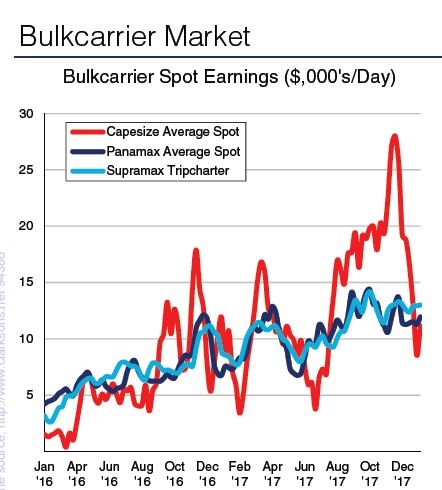 Liner Market News
• Modern c.6,500 TEU tonnage achieved firm rates in the boxship charter market this week, and given the diminishing supply in this size range, additional firming in rates may also be seen from the remaining standard vessel designs. Ships in the ‘Old Panamax’ sector also saw an improved performance on the charter market this week, and limited spot availability in the sector could lead owners to seek further increases in rates. Chartering activity has been relatively subdued in the Caribbean in recent weeks, as the balance of supply and demand has stood relatively flat and few fixtures have arisen from the area. However, a slight uptick was seen this week with some strong rates achieved, including by vessels servicing the Pacific side of Central America. 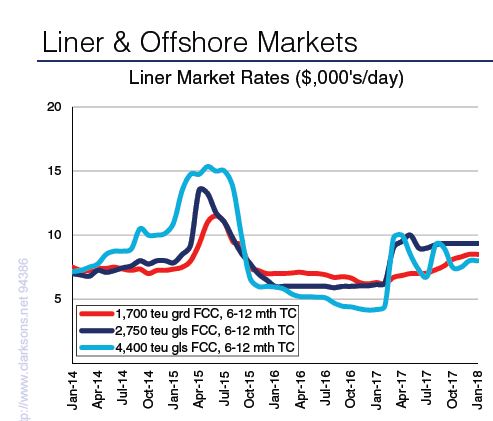 • According to the Shanghai Containerized Freight
Index, the spot freight rate on the Far East-USWC rose 1.5% this week, to stand at 1,467/FEU, while the rate on the Far East-USEC route fell by 1% w-o-w, to $2,761/FEU.
Shipbuilding News
In the tanker sector, Kyoei Tanker ordered a 310,300 dwt VLCC at Namura Shipbuilding. The vessel is due to be delivered in 2H 2020. Fujian Mawei SB won anorder for 6 + 4 x 23,500 dwt product tankers from OceanTankers. The firm units are due to be delivered in 2020.
• In the bulkcarrier sector, Pan Ocean signed a contractfor 6 x 325,000 dwt VLOCs with New Times SB. The vessels are due for delivery from 2019 and are backed by a long-term COA to Vale. Wisdom Marine announced anorder at Imabari for 2 x 37,800 dwt Handysize bulkers, duefor delivery in 2020.
• In other sectors, Hyundai HI (Ulsan) received an orderfor 3 x 84,000 cu.m. VLGCs from Kuwait Oil Tanker, with the units due for delivery from 2019. P&O Cruises announced a contract with Meyer Werft for a 184,000 GT cruise ship, due for delivery in 2022. This is a sister ship to the vessel ordered in February last year and will be able to accommodate 5,200 passengers. 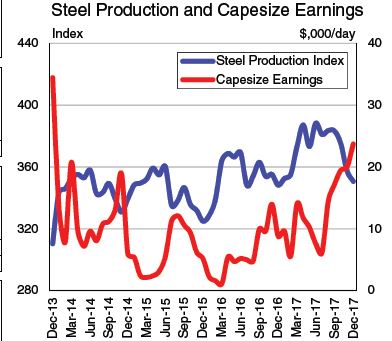