Japanese shipping major Mitsui O.S.K. Lines (MOL) has signed an agreement for the construction of an LNG-fueled tugboat with Kanagawa Dockyard. 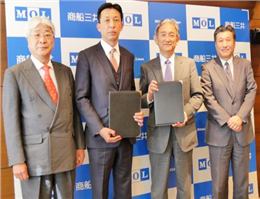 According to MANA, the construction is scheduled to start in February 2018. The vessel is expected to be completed in February 2019, and launched in April the same year.
MOL said that this marks its first ownership of a tugboat powered by LNG-fueled engines produced by Osaka-based Yanmar. The company added that the unit will be the first LNG-fueled tugboat in Japan conforming to the International Code of Safety for ships using gases or other low-flashpoint fuels.
Furthermore, the units is also Japan’s first LNG-fueled tugboat with the LNG fuel tank mounted on the exposed deck at the stern of the ship, which enhances convenience in bunkering, maintenance, and inspection, according to MOL.
0
Visit Home
Send to friends
Print
Newsletter
Share this news