Boxship Orders up nearly Threefold in 2017 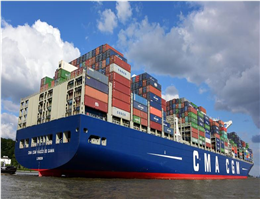 According to MANA, HOST of carriers returned to the yards in 2017 as the orderbook surged 139.5% year on year, new data shows.
Following a slowdown in newbuilding orders in 2016 in response to industry overcapacity, last year container shipping lines ordered 671,641 teu, after order cancellation adjustments, compared with 280,480 teu in the prior 12-month period, according to figures from Alphaliner.
Of the 109 units ordered last year, as many as 83 vessels fell in the 3,000 teu and below size bracket.
Yet most striking was the 20 ships ordered in the 18,000 teu and above size range compared with none in 2016, as carriers, including MSC and CMA CGM agreeing contracts for 22,000 teu units, went big in the newbuilding stakes.
However, Alphaliner noted how orders in 2017 were still sparse in comparison to newbuildings contracted to the yards in 2015, when capacity representing more than 2.2m teu was ordered. This total included as many as 56 ships at or above 18,000 teu.

“That year, many shipowners had rushed to place orders before the International Maritime Organization NOx Tier III requirements — which make ships notably more expensive to build — came into effect for vessels with a keel laying date after December 31, 2015,” said Alphaliner.
Even with the influx of orders last year, the orderbook-to-fleet ratio fell from its end year value in 2016 of 15.7% to its current level of 12.6%.
The ratio fell on the back of nearly 1.2m teu of extra capacity leaving the ramp last year, which “clearly exceeded the aforementioned vessel ordering activity”, Alphaliner said.
Newbuilding deliveries in 2017 also represented a 26.6% jump on the previous year, when approximately 944,000 teu hit the water.
Total deletions from the world container fleet reached 421,562 teu in 2017, down 35.8% compared with 2016’s record of 664,717 teu, according to Alphaliner.
The forecast for 2018 is for more of the same, with only a marginal increase in orders expected.
“In 2018, orders are expected to increase marginally compared to last year’s total,” said Alphaliner. “A number of carriers, including HMM and Yang Ming, will likely place orders, while several non-operating owners remain keen to take on newbuilding projects at the current attractive price level.”
Meanwhile, deliveries are expected to rise to nearly 1.5m teu, while scrapping will pay a large part in about 350,000 teu of capacity being removed from the global fleet.
“This would push container fleet growth to 5.6% in 2018, compared with a 3.7% growth recorded in 2017,” added Alphaliner.
0
Visit Home
Send to friends
Print
Newsletter
Share this news