Shortage of Containers Next Year Is Unlikely

A fear that there will be a shortage of containers in the coming year is unjustified as factories could increase their production if demand spikes, shipping consultancy Drewry believes. 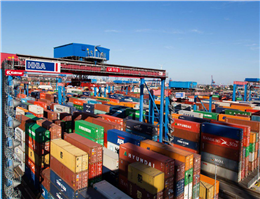 With the rebound in container trades likely to last into 2018, container production might struggle to keep up with demand, some leasing companies worry, MANA correspondent reported.
For the shippers that fill the steel boxes with their cargoes, the prospect of equipment shortages, even if only temporary, will be particularly scary as any limitation on space availability would likely drive up freight rates, Drewry said.
Lessors say the problem is compounded by new regulations introduced in April that require manufacturers to use water-based paint instead of traditional solvent-based coatings.
This takes longer to dry in the cold, humid conditions of the Chinese winter, slowing delivery and clogging up storage space. Added to this, Chinese plants often shut down in February for maintenance, followed by the more general shutdown for the Lunar New Year.
The new paint regulations could disrupt production in the temperate regions of China during the coldest winter months, potentially affecting as much as 60% of global capacity. Given that demand is expected to stay strong into 2018, and there are no precedents to judge how bad the disruption might be, it’s easy to understand why buyers are worried, according to Drewry.
“Lessors and carriers took their eyes off the ball in 2016, responding to the extended downturn in container trade since 2013 and failing to anticipate the recovery seen in the past 12 months. They have been playing catch-up ever since, but it has hardly been an undignified scramble: carriers and lessors alike know that cargo surges can be transitory and are still hedging their bets rather than panic-buying. So if the cargo surge continues, the container industry will be starting from a position of weakness,” Drewry explained.
Production has picked up during the first 11 months of this year, and Drewry is currently predicting production of 3.5 million TEU for the full year.
Most factories have been running with one or 1.5 shifts per day for most of this decade, so utilization has tended to be around 60-70%. If they returned to double-shift production, capacity would be close to 5.5 million TEU a year, or 50% up on the current production volume.
Purchases of new containers by leasing companies have exceeded those of carriers in six of the last eight years, while they have also been buying up the carriers’ older stock of containers. Better access to finance will keep the leasing companies on the front foot, as carriers move away from direct ownership of boxes much as they had earlier moved away from direct ownership of tonnage. Any supply squeeze is thus likely to hit the lessors hardest, Drewry said.
However, the leasing firms do have a safety valve. Most new purchases in recent years have been for replacement rather than expansion. That makes sense, according to the shipping consultancy, since the leasing companies own a large number of older units bought from transport operators in recent years.
“If there is a tightening of supply, the leasing firms have much more scope to hang on to their older units rather than scrap them, thus artificially expanding supply. Those boxes will eventually have to go, but we are looking at a short-term tightening of supply rather than a long-term crisis,” Drewry concluded.
0
Tags: 2018 drewry Container shipping industry
Visit Home
Send to friends
Print
Newsletter
Share this news