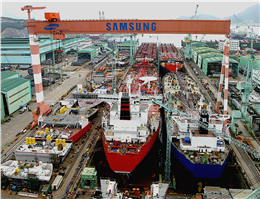 A report in Business Korea said that SHI will ink the contract with a foreign shipping company by the end of the year, Samsung Heavy Industries officials said. The name of the company, however, remained undisclosed, MANA correspondent reported.
The ship will have capacity of transporting 180,000 cubic meters of LNG and she will be probably delivered in 2020, according to local media.
With the deal, orders secured by the shipbuilder this year will reach $6.9 billion for 28 ships, surpassing its annual target of $6.5 billion. The ship maker also said it would secure $3.3 billion of order backlogs from five LNG carriers this year.
The order for the Coral FLNG facility booked in June, priced at $2.5 billion, was the largest shipbuilding contract for a single project, Samsung Heavy said.
0
Tags: Samsung Shipyard contract 2017 LNG
Visit Home
Send to friends
Print
Newsletter
Share this news