IMPROVING container demand and throughput in 2017 has boosted the box sector, but concerns remain regarding overcapacity, according to Alphaliner. 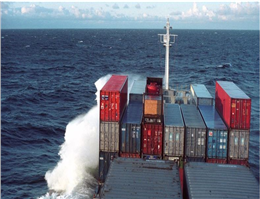 According to MANA, In a review of major developments for the year, Alphaliner said global container throughput had recovered strongly during the year, growing by an estimated 6.7%, its best advance since 2011.
But while the nominal container fleet capacity grew just 3.9%, effective capacity growth reached 9.5% by December, after accounting for a reduction in the idle fleet.
“Carriers’ inability to rein in the effective growth in fleet capacity has been the main reason for shipping lines’ failure to prevent freight rates falling from the peaks of early 2017,” Alphaliner said.
Moreover, the capacity overhang had yet to be fully cleared.
While the idle containership fleet had shrunk to less than 500,000 teu by December, compared with 1.4m teu a year earlier, it still accounted for more than 2% of the global fleet.
Much of this was attributed to the return to service of ships put into layup following the collapse of Hanjin Shipping.
“In the period from late 2016, after the Korean carrier’s failure, until September 2017, some 500,000 teu of hitherto idle ex-Hanjin capacity has been absorbed by other carriers,” Alphaliner said.
Fleet capacity growth in 2017 was double the rate of 2016, when annual growth was only 1.8%, partly driven by a slowdown in scrapping levels.
“Apart from the effect of numerous large containership newbuildings that joined the world fleet, this higher net growth comes partly due to a lower shipbreaking activity,” Alpahliner said. “Vessel capacity scrapped in 2017 reached 427,250 teu, compared to 675,500 teu in 2016.”
Boxship deliveries reached a total of 1.2m teu in 2017, up by more than a quarter compared with the year before. Of these, 55% were ultra large containerships of more than 14,000 teu.
The impact of the continuing overcapacity in the market was that container freight rates remained stubbornly low, despite increased demand.
Although backhaul rates hit unprecedented highs earlier in 2017, this was caused by equipment shortages and disruptions brought about by The Alliance shake-up. Headhaul rates, which peaked earlier in the year, fell back, erasing all the gains made since September 2016.
This came despite an increasing consolidation in the container shipping sector that saw the top 10 carriers increase their combined capacity share to a new record high of 77% by the end of 2017. This figure is expected to reach 82% following Cosco’s takeover of the Orient Overseas Container Line and the combination of the three Japanese carriers to form Ocean Network Express.
And while the big three European lines — Maersk, Mediterranean Shipping Co and CMA CGM — retain their positions at the top of the league table, Cosco and Hapag-Lloyd have closed the gap following consolidation moves over the past two years, with Cosco expected to jump into third place following the completion of the OOCL acquisition early in 2018.
0
Visit Home
Send to friends
Print
Newsletter
Share this news