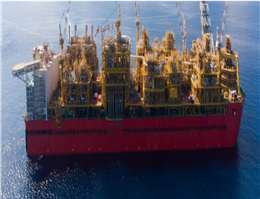 The 488-meter-long and 74-meter-wide floating facility left the shipyard in South Korea in late June and reached the Australian waters in late July, MANA correspondent reported.
Currently, the vessel, which is almost one-third of a mile long with a deck longer than four soccer fields, sits at its first location, Shell's Prelude gas field, around 125 miles north off the Western Australian coast.
The Prelude facility weather vanes 360 degrees around a turret, moored in 248 meters of water. Three stern thrusters enable Prelude to maintain an optimum heading that will facilitate offtake operations within the design limits of the facility and associated cargo transfer equipment.
Fully operational, Shell says it will harvest at least 5.3 million tons per annum (mtpa) of liquids — 3.6 mtpa of LNG, 1.3 mtpa of condensate and 0.4 mtpa of liquefied petroleum gas.
The company claimed that amount of gas would be more than the annual needs of Hong Kong.
The gas is to be pumped up from below the seabed to the floating platform, where it is then cooled. It is fitted with the necessary equipment for exporting LNG/LPG via side by side mooring and loading arms and Condensate via a tandem mooring and floating hose system.
0
Tags: FLNG 2018 Australia shell
Visit Home
Send to friends
Print
Newsletter
Share this news