OCEAN Alliance has unveiled its Day Two Product offering on the back of the initial services launched in April 2017. 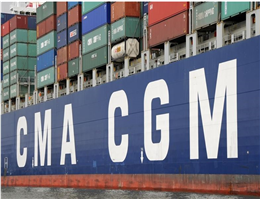 According to MANA, The Day Two Product offering will commence operations in April 2018 and has a carrying capacity of roughly 3.6m teu and 340 boxships dispatched on 41 services, said CMA CGM in a statement.
CMA CGM will deploy 122 of its vessels to the service offering.
There will be 20 Transpacific services, six Asia-Europe routes, four Asia-Mediterranean services, four Transatlantic services, five Asia-Middle East routes and two Asia-Red Sea services in total.
As part of the Transatlantic trade, the new service offering will see expanded network coverage on the East Coast as CMA CGM separates its Victory Bridge service into two, one which handles the US East Coast called the Independence Bridge service and the other the Gulf of Mexico and Mexico known as the Victory Bridge service.
There will also be a direct service from North China and South Korea to the Red Sea with the Ocean Alliance continuing with efforts to raise efficiency and enhance its offering with more ports of call in future.
“Ocean Alliance has been a fantastic success from a customer perspective since its launch last spring and we are very enthusiastic to announce our Day Two Product," said Ocean Alliance Lines senior vice president Olivier Nivoix.
"This new product perfectly illustrates our customer-centric strategy, by improving the service level provided with new solutions in key areas such as US East Coast, Red Sea, Middle East Gulf and Europe.”
The new service offering comes after The Alliance consisting of leading container lines Hapag-Lloyd, Yang Ming, and Ocean Network Express, revealed further details of the 33 services to be covered by its fleet of over 250 vessels and connecting 81 ports worldwide effective from April 2018.
0
Visit Home
Send to friends
Print
Newsletter
Share this news