MEDITERRANEAN Shipping Co is to increase the length of up to 11 containerships of 14,000 teu at a subsidiary yard of China Shipbuilding Industry Corp, in order to boost capacity to 17,000 teu. 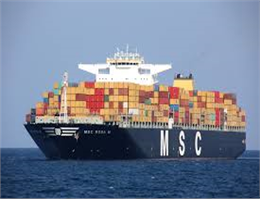 According to MANA, MSC and Qingdao Beihai Shipbuilding Heavy Industry signed a contact late last week, according to an announcement issued by the shipyard on Saturday.
The deal includes a firm order to retrofit nine 14,000 teu vessels, with an option for another two to be confirmed by January 2018.
Beihai Shipbuilding will lengthen the ships to 394.4 m from 365.5 m and also raise the height of the accommodation block and lashing bridge, as part of the retrofitting project.
Lloyd's List first reported in August that MSC was considering plans to retrofit vessels in order to increase cargo intake.
Meanwhile, the shipyard also said it signed a letter of intent with CMA CGM recently to increase the capacity of up to 10 ships of 13,800 teu.
The deal consists of five firm vessel retrofits and five optional ones. No more details were disclosed, however.
Both MSC and CMA CGM ordered a string of 22,000 teu boxships earlier this year, amid competition for bigger market share and lower unit cost.
The former ordered 11 newbuildings at Daewoo Shipbuilding & Marine Engineering and Samsung Heavy Industries, while the latter booked nine units at Shanghai Waigaoqiao Shipbuilding and Hudong-Zhonghua Shipbuilding that will have gas-fueled engines.
0
Visit Home
Send to friends
Print
Newsletter
Share this news